A fertilizer firm has been closed down by the federal government over allegations of adulteration. 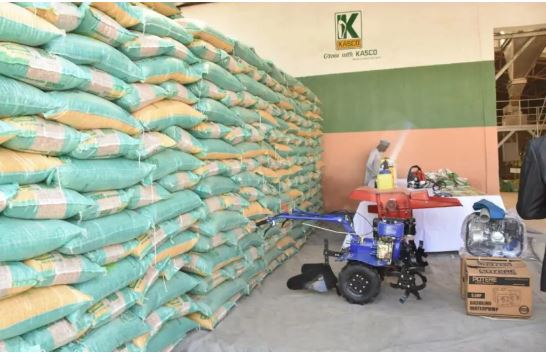 Kasco
A fertilizer firm belonging to the Kano State Government, has been allegedly shut down on the orders of the Federal Government.
According to Daily Post, this is part of the government’s determination to ensure that only genuine fertilizers products get to the farmers.
Food sufficiency has remained part of the major focus of the President Muhammadu Buhari-led government, with its emphasis on local production, as against importation of food items.
This appears to be the brain behind the continuous raid on places considered to be producing substandard fertilizers in recent time.
The FG, through its subsidiaries, and the various State governments have continued to seek ways of making sure that genuine farmers receive necessary incentives to boost local production.
The firm, the Kano State Fertilizer Company (KASCO) Ltd was reportedly shut down after it was discovered to be allegedly adulterating fertilizers and manually mixing the components of the NKP 20:10:10 blend of the agricultural input.
This is coming few days after another private firm was shut down in Niger State for also producing substandard fertilizers.
The order to close the company, owned by the Kano State Government is courtesy of the Presidential Fertilizer Initiative and the National Sovereign Investment Agency (NSIA), through its subsidiary, NAIC-NPK Ltd.
KASCO, was said to have been discovered, during a sting operation, to be allegedly adulterating the NPK 20:10:10 blend of fertilizer and selling same to unsuspecting members of the public.
In a video circulating on social media, labourers at the factory were seen manually mixing fertilizer raw materials with shovels and using same to fill fertilizer bags on the factory floor.
Experts say hazardous chemicals are used to blend fertilizers and if badly handled, could endanger the lives of people. Besides, the chemical could also destroy the soil and hamper valuable crop yield if not used in proper proportions.
It was learnt that Kano State owns two fertilizer blending plants but have allegedly abandoned them due to lack of maintenance.
Our source hinted that besides adulteration, there are also fears that manual handling of fertilizer blending may provide access to unauthorized people to some raw materials such as Urea ammonium nitrate that could be used for illegal purposes.
The Nigeria Sovereign Investment Authority (NSIA) through its subsidiary, NAIC-NPK Ltd is in charge of the implementation of the Presidential Fertilizer Initiative (PFI), an initiative of the Federal Government, designed to ensure high-value fertilizers are made available to Nigerian farmers at affordable costs. It also aims at delivering significant quantities of NPK (20:10:10) fertilizers in time to farmers for wet season farming.
A few weeks ago, the Nigeria Police Force, Niger State Command, intercepted a truck-load of adulterated fertilizers, heading to Bida from Minna, the state capital.
According to the state Police Public Relations Officer, Wasiu Abiodun, the discovery was made by Policemen attached to the Kpakungu Division of the state, while on patrol along the Kpakungu-Bida Road.
The PPRO, who confirmed that a total of 456 bags of the adulterated fertilizer were recovered, said investigations led to the arrest of the driver of the vehicle and one Alhaji Maikudi Abdullahi, the owner of the factory.
Meanwhile, the Kano State Government is also yet to officially react to the allegations.
Top Stories