A doctor has committed suicide after she threw herself into a moving lorry in Kenya. 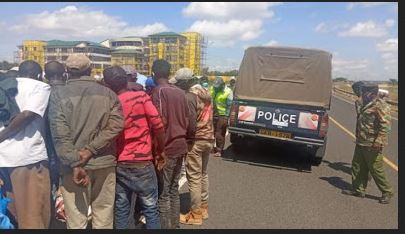 A 57-year-old retired medic allegedly committed suicide on Thursday, June 4, by throwing herself in front of a moving lorry on the Kajiado-Namanga road, Kenya.

Eunice Kinuthia, who worked as a medical doctor at Kajiado County Referral Hospital, died on the spot at Kobil area, a few meters from Kajiado Police Station.

Dennis Owino, the driver of the lorry that resulted in Kinuthia’s death, told K24 Digital that he was heading to Ilbisil area from Kajiado, when the woman attempted to jump in front of the vehicle.

“When I spotted her, I slammed the brakes on. She held on to one of the side mirrors. The braking impact  given the vehicle was in high speed  threw her off, causing her instant death,” said Owino.

Eye witnesses said they had seen Kinuthia seated quietly on the guard-rails since morning.

“She appeared to be in deep thoughts,” one of the witnesses told K24 Digital.