A number of male entertainers in Nigeria have faced allegations ranging from inappropriate behavior to forced sexual misconduct to r*pe. 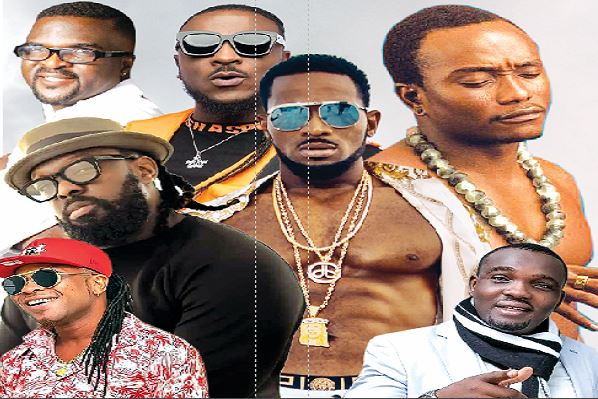 Since young Miss Vera Uwaila Omozuwa was r*ped and killed in Benin, Edo State, the conversation around rape has popped up its ugly head again in Nigeria.

After the uproar on the demand to arrest and arraign the culprits behind the death of the 100 level student of the University of Benin, Edo State.

Following the sad occurrence, a number of male entertainers in Nigeria have faced allegations ranging from inappropriate behavior to forced sexual misconduct to rape.

Before now, Nigerians have kicked against rape and in 2019, Busola, Timi Dakolo’s wife caused a stir when she came out to allege that she was raped by popular Abuja pastor, Biodun Fatoyinbo. Busola’s confession sparked off so much controversy with entertainers taking up the campaign.

However, Vera Uwaila Omozuwa’s case and death have opened a floodgate, sparked a national conversation, and put new pressure on top Nigerian male celebrities to respond.

Here is a look at eight of the top men accused since Vera Uwaila Omozuwa’s case emerged:

Music superstar, Oladapo ‘D’banj’ Oyebanjo, has been accused of rape.

This coming after D’banj took to his Instagram handle to advocating for justice against rape and murder cases.

In support of the late Omozuwa, he wrote, ‘#NoMeansNo We Need to Raise Our Sons right and Teach them to love and Respect Women. We Need Justice for Our GIRLS…Say NO to Rape, Racism, tribalism. Let us stop living in FEAR and HATE, and start living in LOVE”

A few hours later, a rape allegation was leveled against the Kokomaster by a talent manager, Benjamin Ese who claimed that the Afrobeat singer allegedly raped his friend in 2018. “Take this post down and stop clouting, stop being a preacher of Rape cos you’re a rapist,” Ese responded.

Continuing he said, “So you still have the right to post on Rape it’s been two years my friend has been traumatized over this. And as of yesterday, she threatened to commit suicide, she’s so livid and mad seeing a rapist like you post this. If you know what’s good for you please take down that post before daybreak… Some of your celebs are goats.”

In solidarity of the fight against rape, Davido Music World act, Davido had written, “My name is Okoh Tobechukwu, I have never and will never be a rapist,” On Wednesday, an alleged victim, simply identified as Princess via her Twitter page @Jayamah22, accused Peruzzi of raping her. According to her, the Majesty singer made unwanted sexual advancement and had non-consenting sex with her sometimes in 2012.

“In the night, he started touching me without my consent, I tried to tell him that it was wrong and besides he has a girlfriend lying in between. So I left the room and went to sleep in the mini parlor upstairs, I had to leave the room because I was not comfortable anymore.

“Deep asleep, I felt someone trying to unbuckle my pants and then I woke up. And I’m like ‘Peruzzi can’t do that, it is wrong’, that is when we started struggling and he was ‘PRESSING ON MY NECK.’ At that point, struggling was very stressful, you know he tore my underwear and he raped me,” her tweet read.

A few years ago, a UK-based singer, Daffy Blanc accused the DMW artiste of attempted rape. Blanc took to her social media to narrate a terrible night she allegedly had with the singer where he attempted to assault her.

A few weeks ago, the micro-blogging platform, Twitter, went on fire when a user called out Brymo for being a rapist. The accuser shared conservations with an alleged victim of Brymo.

According to the tweet, a female fan paid him a visit in the company of another friend at his residence when he raped her. Minutes of the post, some other women also call out the ‘Ara’ singer for sexually assaulting them. Brymo responded saying that the allegations against him were false as he dares his accusers to come forward.

In 2017, Nollywood actor and producer, Yomi Fabiyi, was accused of demanding sex from one upcoming actress in exchange for a movie role.

An Instagram user @ennygold1 said Fabiyi had solicited for sex to have her star in a movie 9 years ago.

However, the famous actor refuted the allegation as he tagged as ”pull him down by all means syndrome”

According to him, the media should try balancing their reports, saying: ”It is not in my habit to warn or be on the wrong side of the media as I believe we are in here for one another with high respect.

”But please if you are not part of this “pull him down by all means syndrome” campaign going on, I advise you to avoid letting this cheap “BLACKMAIL” seat on your portal.”

Just like Brymo, Nollywood actor Gbolahan Olatunde better known as Bollylomo was recently called out on social media for being a rapist and sexual abuser.

The actor by the same lady who accused singer Brymo of rape allegations.

She took to Twitter to share screenshots of several ladies recounting their alleged experiences with Bollylomo. According to her, Bollylomo had raped several ladies and his victims will soon come out.

Reacting to the allegations leveled against him, Bollylomo described the accusations as being false and statements made to defame his person.

”I have never raped any person,” the actor disclaimed. ”This is not an allegation I take lightly and as such, I have contacted my lawyers and given them a full brief on the issue, hence the reason for my delayed response in addressing these false allegations.

Another celebrity who falls on the list is Fuji maestro, Abass Akande Obesere. He was arrested after being accused of rape by one Miss Olanike Olaiya.

According to Olaiya, the sexual misconduct took place at the musician residence in Lagos after visiting him for business advice in 2014.

For the ‘Egungun Be Careful’ singer, it was consensual, “We both enjoyed and had a nice time together. I have and will never rape a girl in my life,” he maintained in an interview.

After several investigations, the Nigerian Police, however, affirmed that the lady was a blackmailer and declared Obesere innocent. According to Ngozi Braide, the Lagos Police PRO as at the time, the accuser fabricated the report.

Similarly, Nigerian Reggae/dancehall artiste, Chinagorom Onuoha aka Africa China was reportedly accused of rape by an unnamed female when he was in the UK for a show in 2006.

The shocking allegation led to the arrest of the ‘Mr. President’s singer.

Despite being known as a preacher of peace, a bunch of sensational posts stories appeared on social media against the singer.

The 41-year-old artiste agreed sleeping in the same room with his accuser but maintained that he never raped her. African China also claimed that the white lady was drunk and couldn’t go home to avoid her mom’s wrath.

IN 2015, the Egberi Papa of Bayelsa, Timaya was accused of sexual misconduct by Atlanta-based upcoming artist, Sheila B. Sheila took to social media to reveal what had transpired between her and Timaya. Reacting to the allegations, the Bayelsa born singer denied all the allegations saying it was “consensual sex”.

He admitted that he hooked up with the girl in his Atlanta hotel, but says she agreed to the sex.

“It was consensual sex, the lady was a blackmailer who wanted to dupe me off $50K.”