Former Barcelona star, Ronaldinho has spoken of the sixty long days he has spent being under house arrest over forged documentation. 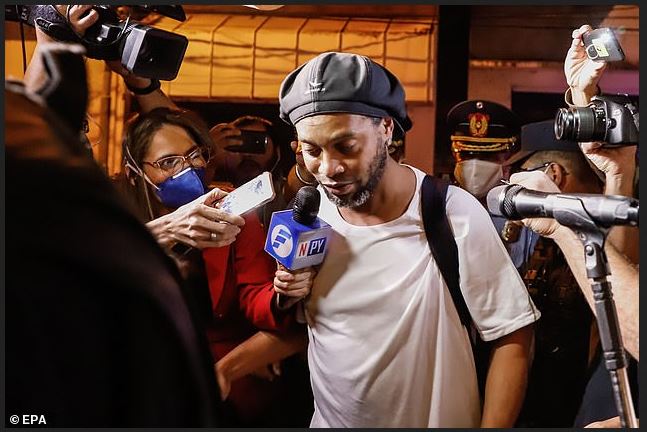 Brazil and Barcelona legend, Ronaldinho has opened up on his ‘sixty long days’ as he remains under house arrest in Paraguay for allegedly using a fake passport to enter South American country.

The 40-year-old and his brother Roberto were arrested in March after police found passports bearing their names with Paraguayan nationality despite having their Brazilian passports confiscated in 2018.

They spent 32 days in prison before they were released from jail in April and then transferred to a luxury hotel where they kept them under house arrest.

Ronaldinho, who reportedly paid a £1.3million bond for himself and his brother to be released says he is ‘very calm’ and is doing ‘anything to pass time in the most pleasant way possible’.

He told Spanish newspaper Mundo Deportivo: ‘It has been sixty long days.’

Comparing his house arrest to those who have been isolating in their homes during lockdown because of the coronavirus pandemic, he said:

‘People in their homes must imagine what it must be like not being able to do what you are used to.

‘I think that is something that will remain with us all forever after living in this complicated experience.

The Brazilian legend is staying in the four-star Hotel Palmaroga, which is one of a number of hotels owned by Barcelona.

Definitely, Barcelona and I are united forever. It will always be my second city,’ he added.

‘Barcelona always treats me with a lot of love and respect. I thank you with all my heart for the messages and your love.

‘It is the most incredible club and the fans live deep in my heart. I thank you with all my heart.’