How My Customers Forcefully Initiated Me Into Cultism - Barber Opens Up


He explained that his customer tricked him into accompanying him somewhere very late at night of the fateful day. 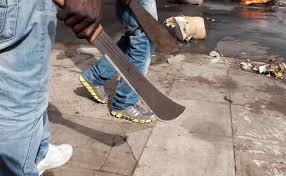 According to Sun News, a 23-year-old barbing salon owner at Jahi District, Federal Capital Territory (FCT), Abuja, Nweke, will live to regret the day his path crossed with cultists under the cloak of friendship. Recounting how he was deceptively introduced into cultism, he explained that his customer tricked him into accompanying him somewhere very late at night of the fateful day only to finally find himself inside a forest where he was initiated.

He said the reality dawned onhim when he was surrounded by seven other young men that took him deep into the forest, forced him to kneel and lie down for several hours, beaten repeatedly with a machete before forcing him to cut his thumb and lick his blood to complete the initiation with a warning not to tell anyone or be ready to die.

However, since joining the group, Nweke lamented that he has neverknown peace. They continuously terrorised him by stealing his valuables whenever they wanted. Since he could not challenge any of them, he endured until the Anti-Cultism Unit (ACU) of the FCT Police Command arrested him alongside the group members.

Nweke narrated his own story: “My ordeal began sometimes in January 2019. I became a cult member through my barbing shop at Jahi District of Abuja. Some of my friends who used to patronise me are the ones that initiated me into cultism.

“They used to come around especially when I was not barbing anybody to gist with me. On that day in January, one of them begged me to escort him somewhere that night at about 11 o’clock. Because I did not suspect anything, I accepted and promised to call him when I closed for the day.

“I called him as promised and went to meet him where he directed me to come, surprisingly very close to a forest. I was afraid but never suspected that he had such intention or that such would happen to me. Unfortunately, when I got there, he called some people that I did not know or ever met previously. I saw strange faces I never met since I started barbing there, numbering eight.

“They directed me to follow them and I had to obey because I was helpless. Knowing that they might kill me should I start to defend myself, I complied and followed them. We went inside the forest and the next thing I saw them brought out a bandana like handkerchief and ordered me to kneel down. I asked the guy that invited me what was happening, you asked me to escort you somewhere, but I can’t understand what was happening.

“I told him that I never believed he could do that to me. I asked him what I have done to deserve such wickedness. Subdued, I complied and they blindfolded me and ordered me to lie down. They used machete to flog me. All through the flogging, they were chanting a song and later directed me to kneel down again, I did and they brought out a sharp razor blade inflicted a deep cut on my right thumb and ordered me to lick the blood.

“Helplessly, I licked the blood. They told me that I have been initiated and taken an oath to be a member of their cult group. They warned that if I should tell anybody what happened, they would kill me. Since that day, I never went out with them because I have a job I am doing. Apart from barbing, I used to draw tattoo on people’s body because I have the machine in my shop.

“Since they forcefully initiated me and found that I was not interested in their group they have not allowed me know peace. Sometimes they would come to my shop to pick up my items like phone, laptop and other valuables and I could not do anything. All I have is regret having a friend like that.

“I have been a barber since 2008. I was born in Enugu and I had my primary school education here in Abuja. I am not yet married and my parents are in Enugu. I will really feel bad if they get to find out my predicament.”

BBNaija 2020: What Nengi Revealed To Neo About Ozo After Eviction