After meeting President Muhammadu Buhari, the Governor of Edo state has dumped his party. 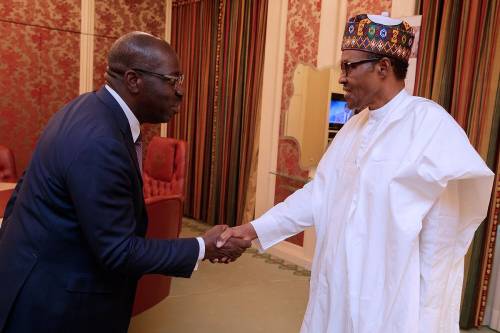 Governor Godwin Obaseki dumps APC over party crisis
Edo Governor, Godwin Obaseki, has resigned his membership of the All Progressives Congress (APC).
The Governor disclosed this to State House Correspondents on Tuesday on his way out of the Presidential Villa.
He also debunked allegations that his credentials were not original.
This is coming after the governor was disqualified by the party’s National Working Committee (NWC) from recontesting in the governorship election.
Days before his disqualification, there was confusion about the genuineness of Obaseki’s university certificate, until the University of Ibadan came out to confirm that he studied classics in the school and graduated in 1979 with a Second Class Honours, Lower Division.
He is reportedly expected to announce his move to the Peoples Democratic Party any moment from now.
Details shortly…
Top Stories