Shocking Confessions of Yaro, The Serial R*pist Who Defiled 3-Month-Old Baby, Others In Nasarawa


Ahmadu Yaro is alleged to have r*ped not only the 3-month-old Adogi Baby, but four others as well. 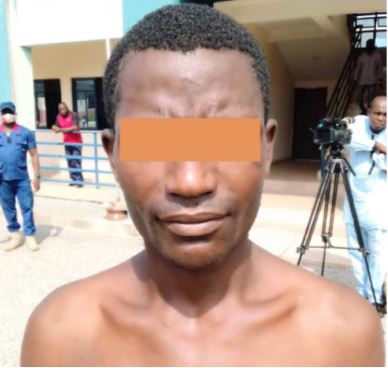 Adogi in Nasarawa State has made the news recently following the abduction and brutal rape of a three-month-old baby on May 27, which incidentally is Children’s Day.

Lying on the outskirts of Lafia, the state capital, the small settlement of 5, 000 grew from a village to a town after the end of colonial rule in 1960.
Following reports by Daily Trust and outcry by thousands of outraged people, the suspected rapist of the Adogi Baby was apprehended by men of the Nigerian Security and Civil Defence Corps (NSCDC).

Ahmadu Yaro, 27, is alleged to have raped not only the Adogi Baby, but four others as well.

“He is presently in custody for allegedly raping a three-month-old baby in Adogi village of Lafia Local Government Area of Nasarawa State,” a deputy commandant of the NSCDC, Bisi Olaboyega, said in Lafia.

The suspect, Ahmadu Yaro, said raping the Adogi Baby, who now needs surgery to allow her to defecate normally and rectify other damages done to her, was not his first victim as he had raped other babies before.

“I regret defiling the girl,” the 27-year-old suspect said.

“She is the fourth baby I defiled. The others are also all less than two years old.”

On his rape of the Adogi baby, Ahmadu described what happened and how a search party found the baby, almost nabbing him in the act.

“I was raping her in an uncompleted building when I heard a motorcycle [leading] a search party,” he said.

“I then ran away. After the baby was found,” the suspected serial rapist said.

Mother of the victim, Maimuna Aliyu said Ahmadu’s name had been mentioned as a possible suspect after the rape of her daughter before his arrest.

“We got information that he was the one but since he wasn’t apprehended, we kept quiet,” she said.

“Since the government has arrested him and he has confessed to the crime, they should help by giving him the punishment he deserves.”

In Adogi, Ahmadu Yaro’s name has been synonymous with such crimes.

Two years ago, community members had arrested him on suspicions of a similar crime.

However, he was never handed over to security personnel and was eventually set free.

While many wonder if there was a ritual motive behind the serial rape of babies in Adogi, the suspect said that was not the case.

The NSCDC deputy commandant, Mr Olaboyega, who confirmed the arrest of the suspect two years ago, said the suspect is claiming to have a mental illness.

Ahmadu Yaro himself repeated the claim.

“I was told in a hospital in Kaduna that I was sick,” he said to reporters during his parade before journalists.

“At the time I had started petty thefts before I began defiling minors.”

The traditional ruler of Adogi, Alhaji Hamidu Ladan Usman Adogi said he was unaware of the suspect and the suspicions around him but since the rape of the Adogi Baby, he has been eager for the suspect to be arrested.

“When I heard of the sad incident, I invited the clergy to pray for the suspect to be arrested and God has answered our prayers,” he said.

Concerned by the injury Ahmadu’s activities have caused the baby and the reputation of Adogi, he insisted that the people of the village are peaceful and are not rapists or lawbreakers.

“Ahmadu Yaro has made my town famous, but with a bad scar,” he said in a low voice.

The rape of the Adogi Baby, however, has thrown light on the issue of rape in the state.

The baby has had three surgeries at the Jos University Teaching Hospital.

And she is due for follow up surgeries in the next couple of weeks.

Activist Amina Aminu coordinated donations for the family to help them foot the bill of the treatment and improve the victim’s life after her discharge from the hospital.

However, First Lady of Nasarawa State, Hajiya Salifat Sule said she is committed to footing the bills of the next surgery and that of other rape victims in the state.

“My office is working in collaboration with the Nasarawa State Ministry of Justice to ensure that those involved in the act of rape are prosecuted according to the law of the country,” she said.

The Nasarawa State House of Assembly has said it will enact a stringent law that will protect women against rape in the interest of peace and the overall development of the state and the country at large.

Speaker of the House, Alhaji Ibrahim Balarabe-Abdullahi said this while addressing a group of women who went to the house to protest against rape.

The speaker said the law if enacted, will not only protect women against rape but would also punish those found guilty to serve as a deterrent to others.

“Cases of rape are alarming in the country. What is happening to our mothers, wives, daughters is sad and unfortunate,” he said.

He further said the assembly would collaborate with the ministry of justice to tackle the situation.

Leader of the protest, Hajiya Zainab Ahmed, a former Secretary to the State Government and a former Amirat of the state chapter of the Federation of Muslim Women Associations of Nigeria (FOMWAN), said they were at the assembly to seek the support of the House in the area of legislation against rape.

While all the rhetoric is going on, Adogi, a town of 5, 000 people is in the news for the wrong reasons and the innocent Adogi Baby’s chances at any kind of normal life are dependent on the surgeries she will have.

What is clear is that some of the injuries inflicted on her, on a day children all over the world are being celebrated, cannot be cured by any kind of surgery.

And these she would have to live with for the rest of her life.