He argued that there was no ideology binding the party members together and that it was all about sharing offices and power. 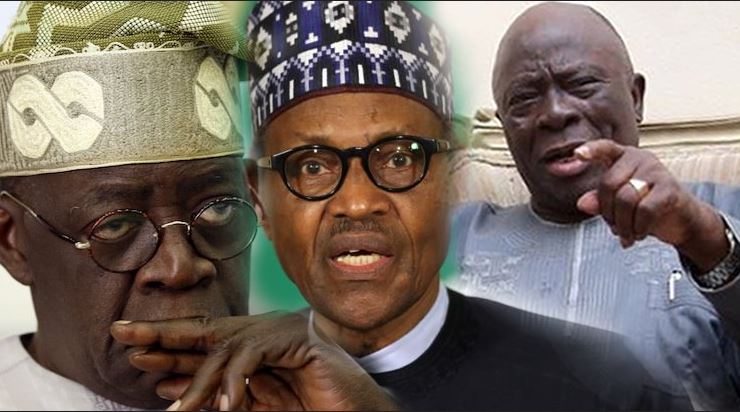 Following insinuations that the recent developments in the All Progressives Congress were indications of a rift between the President, Muhammadu Buhari and the National Leader of the APC, Asiwaju Bola Tinubu, Afenifere chieftain, Chief Ayo Adebanjo, has said he knew the President was allegedly deceiving Tinubu all along, The PUNCH reports.

Adebanjo said the national leader was also deceiving the President as he described the APC as a gathering of incompatible persons. He argued that there was no ideology binding the party members together and that it was all about sharing offices and power.

Even though the Presidency said there was no rift between Buhari and Tinubu, many commentators described Thursday’s decision of the National Executive Committee of the APC to dissolve its National Working Committee as a blow to Tinubu, who is believed to be pro-Adams Oshiomhole, the sacked chairman.

There have been widespread claims that Tinubu, a former governor of Lagos State, was eyeing the presidency in 2023, and that the recent development in the party was a way of truncating his ambition.

Adebanjo said, “I have worries for him (Tinubu). He knew all these things but he relied on Buhari and worked to make him the President. I said it before publicly that Buhari is deceiving Asiwaju and Asiwaju is deceiving Buhari. Everybody is trying to use the other. Why can’t Tinubu hammer on restructuring knowing that this was what brought Buhari to office?

“I have been in this game for 70 years. So, many of those who are talking now were not born then. That is the truth – even Buhari was a toddler. He is now 74. Each time I tell you, why should Tinubu, the Vice-President (Yemi Osinbajo) and all those who were in Alliance for Democracy run to the APC? Why are they hesitating now to stand for restructuring? They can’t talk.

“All the things I am telling you now – it is not the first time. I said both Jagaban (Tinubu) and Osinbajo should get out of the APC. I said it openly. It is a disgrace and disservice to the Yorubaland. So, what is happening now shows there is nothing to bind them together.”