She claims she remembers the perpetrators as she sees them at the garage where she was sexually abused. 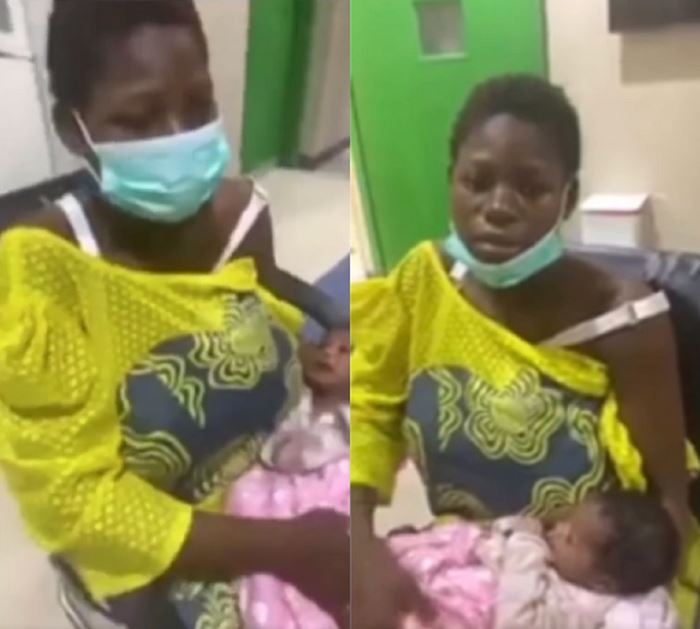 16-year-old girl, Aisha, got pregnant after she was allegedly gang raped by 4 men, has given birth to her baby through Cesarean section.

The 16-year-old Aisha was allegedly gang raped in Lagos state when she had no place to stay and was leaving in a commercial garage and after she got pregnant, she continued sleeping from shop to shop.

In a video that surfaced online, Aisha and the medical personnels on ground at Gbagada isolation centre, shared her story.

Aisha who is in the isolation centre after testing positive to coronavirus (COVID-19) was brought into Lagos by an aunty who she claims abandon her. With no place to stay, she started sleeping in the garage where she was gang raped and got pregnant.

When she went into labour, she was taken to Gbaja hospital where she had her baby through C/S and tested positive to Coronavirus.

She was then transferred to Gbagada Isolation centre with her baby who at the time of the video recording was two days. The teenage mother’s breasts were also not producing milk for the baby.

However, she claims she recognizes the people who raped her and while she pregnant, she used to see them at the garage. She is alone with no family member to rescue her.

16-year-old girl Aisha got pregnant after she was allegedly raped by four Men in Lagos. Now she’s stranded at a Lagos Isolation center after giving birth to her baby girl through CS as no one is attending to her and her 2-day-old baby.