He molested a neighbour’s four-year-old daughter and attributed his wicked act to a mental illness, which has afflicted him for some time now. 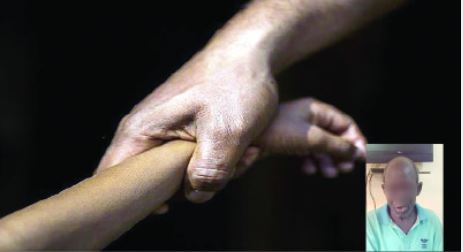 Being a sexagenarian, Demi, an indigene of Urhobo, Delta State, is expectedly supposed to be a respected father of many especially the children in his neighbourhood. But he is in the contrary he is a wolf in sheep’s clothing.

Instead of being a father at 65 years conferred on him, Demi rather preferred to be an emotional terrorist and an unrepentant paedophile. He molested a neighbour’s four-year-old daughter and attributed his wicked act to a mental illness, which has afflicted him for some time now.

Although it is not certain how many girl child he had molested, however, luck ran out of Demi, when he was caught pants down by the mother of the little girl in his one-room apartment where he lured the little innocent girl into with a plate of food.

Demi, the oldest man in the compound, is currently cooling his head inside the police custody after his arrest, thanks to the alarm raised by the girl’s mother that attracted other neighbours.

He confessed that it was his first time in abusing the girl. The grandpa who once worked as a security guard in various Abuja companies, admitted that he lured the innocent child with a bowl of garri and soup. He said it was after she was done eating that he disgracefully had canal knowledge of her.

Married and has children and grandchildren and hunted by joblessness for about two years now, he said though he deeply regretted his shameful act, he was possessed by strange irresistible forces:

“I am 65 years old from Warri Delta State. I am jobless at the moment but I once worked as a security guard with a private security organisation before I was laid off. They terminated my contract about two years ago. After that I joined another private construction company but the work ended and since then I have been jobless.

“I have children and they have been the once sustaining me. I also have a wife. I live at Mabushi. I was arrested for a case of rape. They said I raped a small girl in my compound who happens to be my neighbour’s child. She is four years old.

“It is a long story, it is not ordinary, it is something that has afflicted me for more than four years now. And it is comes up between October and January every year. I have mental problem. The situation has sometime made me behave in an irrational manner.”

Asked if the illness makes him rape children, he said he hardly has time for women let alone children: “I do not know what came came over me.

“I don’t just know, I was eating with the child in my house, we were eating together in my room. I stood up and left the food for her and went to wash my hands outside.

“I did not even lock the doors everywhere was open. Then by the time I came back, the child had finished eating and with her hands stained with food, she climbed the bed that she wanted to sleep and I said okay, come and sleep.

“When she climbed the bed I said the food has finished get down from the bed but she said no. And as I was trying to drag her out of the bed she ran inside the bed the more that was all. After I succeeded in dragging her out of the bed, I now saw that she was holding me, I then responded by holding her back.

“As she held me, both of us then sat down on the bed and my leg was on the ground and then I placed her on my laps and brought out my penis from my trousers. She was not wearing pants so I carried her on my legs and then started to force my penis into her vagina, but I could not penetrate fully and I did not even enjoy it.

“It was the mother of the child that came and caught us inside my room because we live in the same compound and I did not lock the doors because I had no bad intention. The problem is that once that mental illness disturbing took over me, I will start behaving anyhow.

“When the mother caught us, the child was with right on my lap and she was not wearing pants and I did not remove my pants or clothes. All I did was to bring out my penis from the corner of my trousers and try inserting it.”

Asked if he had erection, he said: “No, the thing did not stand very well. It just stood small because it does not have much power again like in the past. Honestly, I can’t say whether I enjoyed it or not.”

On how he would feel if someone his age had done it to his grandchild, he said: “I will not be happy to be frank with you. I will not like it at all because it is very bad. That is why I blame the thing on this mental problem that I have. I have been to many hospitals to cure the ailment but I have not been able to get a solution.

“My children know about my ailment but they don’t know that I rape children. They have taken me to Wuse General Hospital and I get treated periodically when it starts and they usually prescribe drugs for me that take my mind off these bad things.”

On when he last had sex as a married man that he claims to be, the suspect said: “I am not a womanizer because I have a wife and I had sex two months ago. My wife stays at Ado, we were together in Mabushi where I built my own house. Two months ago I was at Ado to visit my wife and that was the last time I had sex.