A black woman was left terrified after a white woman pointed a gun and threatened to kill her during an argument. 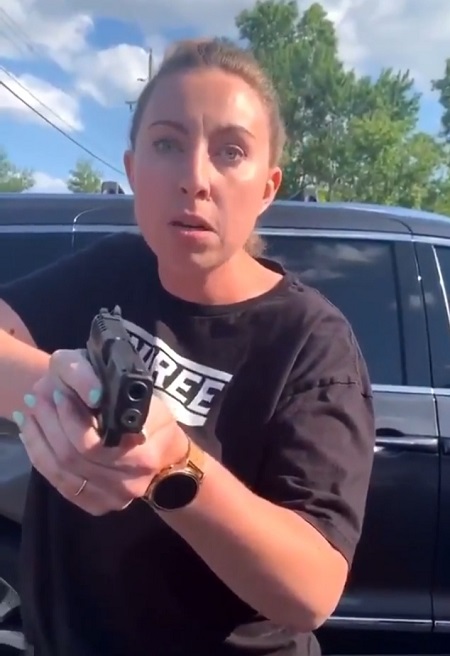 The white woman pulled a gun at the black woman during an argument.
The shocking moment a white woman pulled her gun and threatened to kill a black mother and her 15-year-old daughter has been caught on camera.
The sad incident took place during an angry exchange with accusations of racism outside of an Oakland County Chipotle restaurant on Wednesday.
Detroit News reported that Takelia Hill, who is Black, said her daughter was allegedly bumped into by a the white woman, before entering the fast food restaurant in Orion Township at about 8 p.m. The daughter said she asked the woman for an apology and said the woman began yelling at her.
“Before I could walk into Chipotle, this woman was coming out and I had moved out the way so she can walk out," said Makayla Green. “She bumped me and I said, 'Excuse you.' And then she started cussing me out and saying things like I was invading her personal space.”
The teen called her mother over because she said she was scared.
“I walked up on the woman yelling at my daughter," Hill said. “She couldn’t see me because her back was to me, but she was in my daughter's face."
The initial encounter was not caught on video. The footage starts after the altercation moved to the Chipotle parking lot near the vehicle of the woman accused of bumping into the teen.
At one point, the woman who pulled the gun listens to the mom and teen, one of whom repeats that the woman is "ignorant" and "racist."  A man from the vehicle exits and asks the pair, "Who the (expletive) do you think you guys are?" and helps the woman into the SUV. He and Hill exchange angry words before he walks back to the driver's side.
From the passenger seat, as Hill asks the woman why she bumped her daughter, the woman says through the rolled down passenger-side window: "You cannot just walk around calling white people racist ... White people aren't racist ... I care about you and I’m sorry if you had an incident that has made someone make you feel like that. No one is racist ..."
The woman rolls up her window and Hill is seen stepping back as the SUV starts to drive away.
Hill then said she thought the driver was going to hit them as the driver backed out of the parking space, so she hit the back window of the SUV to stop it.
The woman jumped out and pulled a gun. The woman walks backward and repeatedly shouts "Get the (expletive) back!" and "Back the (expletive) up!" as she points the gun. The mother and teen begin yelling and calling for the cops as the woman climbs back into the SUV.
The Oakland County Sheriff's Office was called after the gun was drawn, Hill said.
Hill said the incident left her and her other daughters, who were in family's vehicle, traumatized.
Watch Video: