An aerial attack by Boko Haram terrorists at a United Nations helicopter has seen more than two people dead. 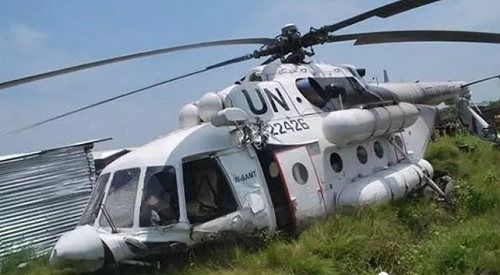 File photo
Two civilians have been killed after Boko Haram terrorists opened fire on a United Nations aid helicopter in the northeastern state of Borno on Saturday, July 4.
The attack came after the terrorists warned civilians who help humanitarian agencies or the military that they could be killed.
Edward Kallon, the U.N.’s humanitarian coordinator in Nigeria, told AP that a 5-year-old child was one of the victims.
The crew members were not hurt and there were no aid workers on board when bullets hit the helicopter.
“The U.N. Humanitarian Air Service is essential to evacuate wounded civilians and remains the backbone to facilitating humanitarian access,” Kallon said.
Some 1.9 million people have been displaced by the decade-long Boko Haram violence in northeastern Nigeria.
The U.N. World Food Program warns that a total of 3 million people are facing hunger in the region due to the conflict.
Security has long been a concern for aid groups operating in northeastern Nigeria, where humanitarian workers are often kidnapped and killed by terrorists.
President Muhammadu Buhari has vowed that there will be consequences.
“This latest cowardly attack on the UN humanitarian helicopter is yet another desperate rear guard action by the Boko Haram terrorists who have been under intense pressure from the Nigerian military," the president said.
“Let me reassure the international community and Nigerians that this latest cowardly attack on a UN helicopter which claimed the lives of two people, including a five-year-old baby, would not go without severe consequences.
“Boko Haram terrorists are clearly on the back foot and their increasing attacks on innocent civilians, including UN humanitarian workers, is part of their desperation to prove that they are strong in order to cover up their dwindling fortunes.”
According to the president, the security of foreigners and Nigerians remain the top priority of his administration, adding “we shall leave no stone unturned until we eliminate these remorseless enemies of humanity."
More than 50,000 people have been killed by Boko Haram in the northeast since 2009.
Top Stories