The Church also known as Assemblies of Light Bearer Greater Church was founded by a young man identified as Ifekwe Udo. 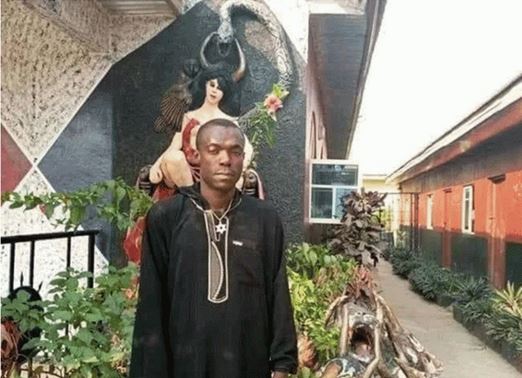 According to Vanguard, the residents of Ebem, Ohafia town in Abia State where the Church of Satan was located, yesterday expressed their joy following its demolition by irate youths, claiming they were afraid to confront the founder because of alleged possession of evil powers that could kill anyone who challenged his activities.

The Church also known as Assemblies of Light Bearer Greater Church was founded by a young man identified as Ifekwe Udo.

He was alleged to have converted some youths of the area to his church by assisting them with motorcycles for commercial business (Okada) and other forms of empowerment.

Udo , popularly known as Lucifer, was also said to have continued terrorizing the Ohafia community as no one dared to challenge him.

A youth leader in Ohafia, Egwu Ibem, told Vanguard that “everyone in Ohafia knew Ifekwe Udo did not mean well for Ohafia community with the nature of activities he was involved in. He was a bad influence on the community, especially our youths. Some of the youths started joining him because he was empowering them with motorcycles for Okada business. There are reports that he used charmed (juju) on his followers. He also established a brothel in the community.

However, nemesis caught up with Lucifer as he was arrested by the Police in the state for violating the protocol on COVID-19.

Following his arrest, youths of the community summoned courage and stormed the church demolishing the various images located in the compound.

Vanguard gathered that the Ebem community erupted in celebrations as the various graven images were being demolished.