Horror! Many Burnt To Death As Petrol-Laden Truck Explodes While People Were Scooping Fuel In Delta


Four vehicles were also said to have been destroyed in the incident, which multiple sources said happened around 8am. 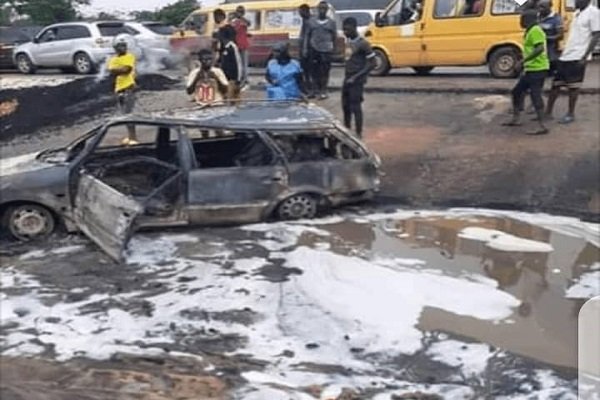 According to a report by The Nation, no less than 17 persons were reportedly burnt to death in a tanker explosion near Koko junction section of the Benin/Sapele Expressway, Ethiope West council area of Delta state on Wednesday.

Four vehicles were also said to have been destroyed in the incident, which multiple sources said happened around 8am.

The Police however said only three persons died in the inferno.

The Nation learnt the petrol-laden Eveco truck was trying to manoeuvre a bad spot when it fell.

It was said to have exploded when residents of the area rushed to the scene to scoop fuel.

A reliable source said driver of the tanker had gone to report the incident and residents scooping fuel at the Police checkpoint in Koko junction when they heard the explosion.

The source said the victims, though unidentified, included a man and a woman.

A truck driver, Kola Akintayo, who witnessed part of the incident, said a vehicle, which was passing by scraped a metal while residents continued to scoop the product.

“That was what caused the fire. The driver had gone to report that the tanker fell. The next thing was fire.

“I don’t know the number of persons that died because we were not allowed close to the place. A car got burnt. The tanker got burnt too”.

Officials of Federal Road Safety Corps (FRSC) and security agencies reportedly assisted to evacuate the corpses and rushed other injured persons to a hospital in Oghara community.

The incident caused heavy traffic in the very busy route, forcing travellers and commuters to trek good distance before continuing their journeys.

Some traders were seen with wares on their head, justling for the the tiny space on the congested road.

Mobile policemen were seen trying to control the traffic as motorists vented frustration over the traffic congestion.

The Delta State Police Command however confirmed only three persons were burnt beyond recognition on the spot.

Spokesperson, DSP Onome Onowakpoyeya, said: “The driver was trying to negotiate a bad spot when the truck fell.

“Two cars were burnt together with three motorcycles. Three humans were burnt beyond recognition”.