Nigerian musician, Simi has taken to her social media page to share a cute photo of her child. 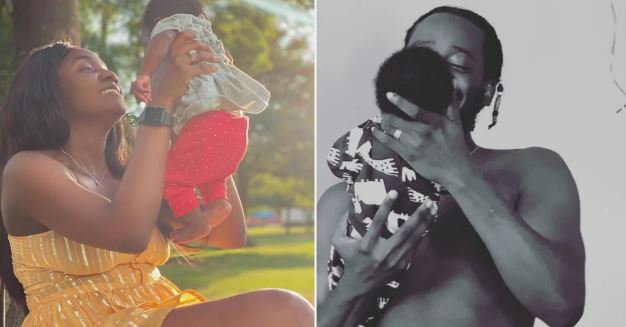 Simi shares photo of her baby
Weeks after welcoming her first child, singer Simi has shared a photo of her daughter with Adekunle Gold.
Although she is yet to fully unveil the face of her newborn to fans, the mother and baby are doing fine.
In the photo, Simi was seen lifting the little one to the air as they were captured by the camera.
She accompanied the post with a powerful caption in which she made it clear that there is nothing in the world she would not do for her.
Sharing the post, she said: "This little light of mine. there's nothing in all the universes I wouldn't do for you Ayo."
Reacting, several fans and followers flooded the singer’s comment section with lovely remarks.
Read what they had to say below:
yo.bami: "Mummy & Daughter."
anioyinzy: "Am gonna let it shine."
rebecca_nengi1: "Show her face abeg am tired of suspense wanna see pretty Deja."
barbie_florence24: "Awwwnnnn....so sweet."
drliki01: "Mother and Baby Love."
officialpure1: "Our baby duduke."
Also reacting to the lovely photo, the Simi’s husband and father of her child, Adekunle Gold, said: "My whole world."