A popular Nigerian prophet has opened up on who will become the next governor of Edo state. 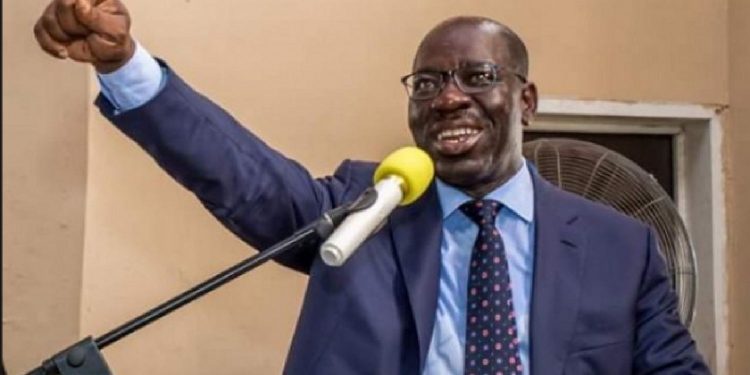 Godwin Obaseki
Primate Elijah Ayodele, thethe leader of the INRI Evangelical Spiritual Church has revealed the person God told him will win the forthcoming governorship election in Edo State.
The contest is mainly between Peoples Democratic Party, PDP’s Godwin Obaseki, who is also the incumbent and the candidate of the All Progressives Congress, APC, Pastor Osagie Ize-Iyamu. The two are the leading contestants for the September governorship election.
Ayodele, in a series of prophecies stated that God told him that Obaseki will win in a free and fair electoin.
He made the declaration on Thursday according to DailyPost.
He, however, warned that anyone who engages in manipulating the election by rigging will die of the dreaded coronavirus disease,
According to the cleric, the incumbent Governor needs to be focused because God wants to fight for him.
“Without mincing words, this is what the Lord said, Obaseki should be focused, do all the needful things, Obaseki will win, not Ize Iyamu, excepts APC rigs and anyone who rigs will die, just as I said Covid-19 will kill those who corrupted Nigeria,” he said.
He said Obaseki should not be bothered about people leaving his camp but should stay focused.
“Edo election is more than what anyone can stop, Edo election is for PDP, God wants to fight for Obaseki, I have never met him or collected any kobo from him, if I have, let him come out and disgrace me, I am talking as a Prophet,” he said.
“I even like Oshiomhole more than Obaseki and I don’t pity Obaseki but Oshiomhole will not be the one to give the next governor to the people of Edo state, I’m only saying what the Lord is telling me to say.
“Anyone who rigs will die of Covid-19, Obaseki should wake up, He will win without manipulation and rigging,” he added.
Top Stories