Man Mocked For Being A Failure In Junior School, Graduates With 27 Distinctions From University (Photo)


A man has become a source of inspiration for many people rising against all odds. 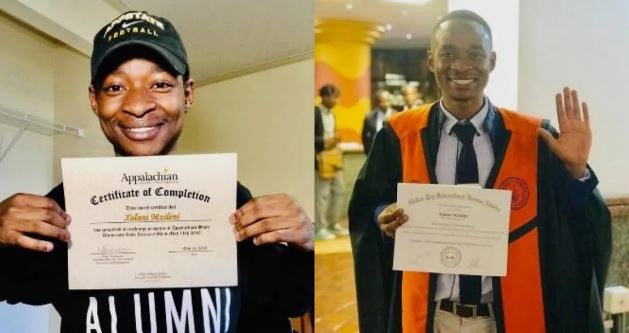 Xolani Mzileni
A 26-year-old man has finally made his family proud after many years of enduring mockery from fellow students due to his poor academic performance.
Xolani Mzileni from Katlehong in South Africa became a source of caricature among fellow students while growing up because he struggled in school, failing at one point.
But, he turned things around to eventually end up with 27 distinctions from the university.
He is currently attending a masters student course in Operations Management at the University of Johannesburg.
His childhood was not easy, growing up in a township with very little in the way of services, no running water, healthcare facilities, proper housing and other essential services.
He began to realise his academic potential in Grade 11, which he failed.
Instead of giving up, Xolani repeated Grade 11 and eventually matriculated in 2013. He took a gap year from studying to sort out an issue with his ID book and worked as a day labourer.
His dream was to attend university and help the community. Xolani joined a tutoring programme in his community and taught life sciences and geography.
He decided to try applying for university and was successful and got a spot at the University of Johannesburg where he enrolled in a diploma in a Management Services course.
Things were not easy, with no funding, he was forced to sleep in lecture halls for three months and was lucky enough to get food from the Gift of the Givers (GOG).
For his 2016 semester, he maintained an 85% average and went on to rack up a number of significant awards such as the diploma in Management Services and the Golden Key International Honour Society for being among the top 15% students in the University of Johannesburg.
Xolani didn't stop there. He founded the South African Renewers of Hope (SARH) non-profit corporation. He is the president of the Industrial Engineering and Operations Management (IEOM) UJ Society.
He is the current co-vice president for Golden Key International Honour Society UJ Chapter and he has been awarded Gold Status and Key Chapter award.
Recently, he was appointed as the influencer and mentorship manager of a new App which is in development and aims to bring influencers and brands together.
With all his hard work and sacrifices, Xolani obtained 27 distinctions, graduated in record time for his diploma in Management Services with 83% overall average and also graduated with Distinction for his Honours/B-Tech in Quality.
He has also taken part in an international student exchange programme where he studied at the Appalachian State University, North Carolina in the United States.
His story is an inspirational one and he hopes to become a role model for youth in South Africa and help them realise that they can achieve their dreams.