Impossible! See The Woman Who Gave Birth An Hour After Discovering She Was Pregnant (Photo)


The 30-year-old has been making headlines in her country after her claims that the birth of her baby boy happened one hour after she discovered she was pregnant. 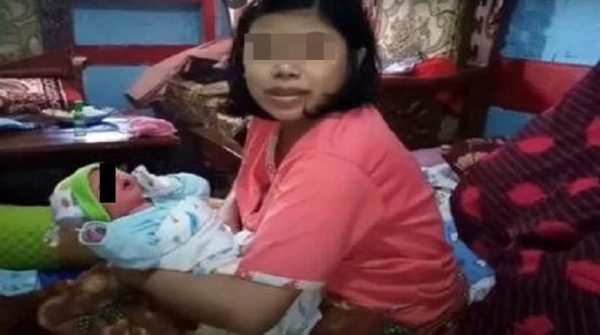 It is common knowledge that human pregnancies normally last around 9 months but Heni Nuraeni, an Indonesian woman is claiming to have given birth just one hour after she experienced pregnancy symptoms.

The 30-year-old has been making headlines in her country after her claims that the birth of her baby boy happened one hour after she discovered she was pregnant.

Nuraeni who is from Mandalasari, a village in Indonesia’s Tasikmalaya Regency claims that on July 18th, her stomach started growing.

She also claims to have experienced painful cramps which she associated with childbirth because she has had two children before.

“I was at home, and nothing was out of the ordinary,” Heni recalled about the night of her childbirth. “Suddenly, I felt something moving on the right side of my abdomen and the cramps started. I asked a neighbor to take me to my father’s house and about an hour later we called a midwife and I gave birth.”

Her story is even more confounding as she claims that not only was she unaware of the pregnancy but she has not also made love with her husband Erik in 19 months.

They had apparently abstained from sex after the birth of their second child, for medical reasons, which was confirmed by Zalkap Drasman, the head of Puspahiang Sub-District.

“This is what makes this incident strange but true, but we are grateful because with God’s will anything can happen,” said Zalkap.

Heni admits that she gained some weight in the months leading up to childbirth but did not experience pregnancy symptoms like her first two pregnancies.

She insists that she had her period every month for the last nine months, which doctors attribute to a hormonal imbalance.

It is this small detail – the lack of intercourse – that makes the doctors reluctant to provide the simplest explanation – a case of cryptic pregnancy, where the mother doesn’t know that she is pregnant.