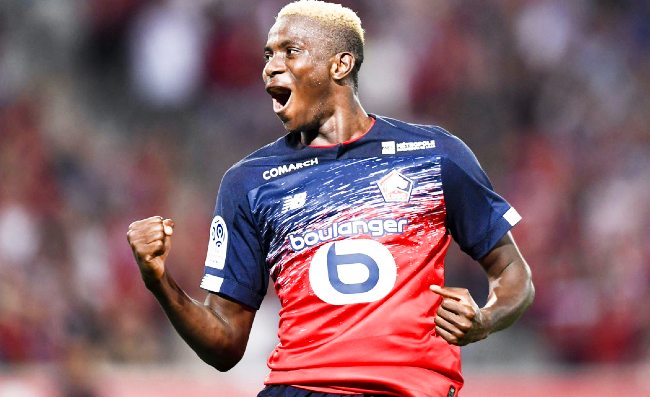 Victor Osimhen
Super Eagles striker Victor Osimhen has signed his African record deal to Napoli from Lille on Friday.
According to Punch, he has now been quarantined by Nigerian health officials.
The deal, worth €70m, which could rise to €80m with bonuses, was completed before the player traveled to Nigeria for holiday, our correspondent gathered from his agent Osita Okolo.
“We are hoping they (Napoli and Lille) announce the deal soon as they promised,” Okolo told The PUNCH.
“He signed for Napoli last Friday. There was no way Osimhen would have left for Nigeria without completing his deal to Napoli.”
Meanwhile, Osimhen and Samuel Chukwueze have been quarantined in isolation in Lagos after the duo arrived Nigeria aboard a private aircraft on Monday on holidays.
The 21-year-old striker underwent similar self-isolation when he arrived in the country in May for his father’s burial alongside Paul Onuachu and Imoh Ezekiel.
It is the third time the player has been isolated since the COVID-19 pandemic broke out in March.
He was isolated on his return for his father’s burial and was also quarantined when he returned to France to regroup with his club.
Osimhen, who was Lille’s top scorer last season, bagged 18 goals in 32 games in his debut campaign in Ligue 1 and was named the club’s Player of The Year and also won the Marc-Vivien Foe Award for the best African player in France.
Top Stories