A woman can now smile in happiness after carrying a bulging stomach for 13 years not knowing she wasn't pregnant. 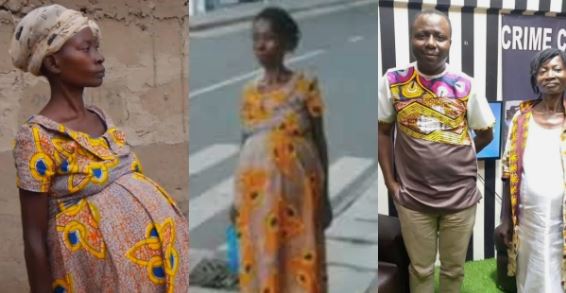 Mary Quansah
A middle-aged woman, Mary Quansah from Ghana has thanked God after undergoing a delicate surgical procedure that removed fibroids from her bulging stomach for 13 years.
Many people had thought she was pregnant for the past 13 years as she carried her bulging stomach around.
She was helped by the Crime Check Foundation who took to Facebook to share the story.
Mary returned after the surgery and expressed immense gratitude to the foundation for the good done to her.
When Mary's story first hit the internet, it was reported that her fibroid lasted for five years, but that has been subtly ruled out by the charity foundation's report.
According to a short documentary that was done to solicit funds for the woman, Mary's fibroid had covered her entire belly from the pelvic region to her chest.
A nurse who identified herself as Lucy narrated the predicament and the extreme nature of the fibroid saying:
"When I saw her I thought she was pregnant with triplet only to find out that it is fibroid that has filled up her belly in this manner. Right from her pelvic side up to her thoracic level."
The nurse further indicates that she had not seen such an extreme case before and noted that Mary's kidneys and gall bladder have all been badly affected.
Top Stories