James Patterson's remains were found following the recovery of a car from the River Bann in Bellaghy. 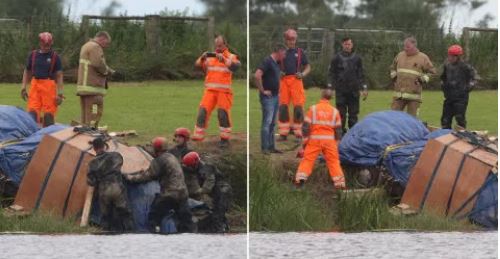 The body of a man who disappeared three decades ago has been found in a car submerged in a river in Northern Ireland.

James Patterson went missing on October 6, 1991 and was last seen at Mid Ulster Hospital in Londonderry. He was 54 years old.

After the car was recovered, human remains were discovered inside which were later identified as those of Mr Patterson.

His death is not being treated as suspicious.

Councillor for the Ulster Unionist Party, Derek McKinney, said he hoped the investigation ‘will be able to give his family some answers after all of these years.’

He was quoted in the Daily Star as saying: ‘I knew James’ brother and he told me before he passed that he was a quiet man who would keep himself to himself.

‘He said that he would think about his brother every night wondering where he had gone.’

A PSNI statement said: ‘Police can confirm human remains were found following the recovery of a car from the River Bann at the New Ferry Road in Bellaghy last month.

‘The vehicle was recovered from the river in July and, following examination, it has been confirmed the human remains are those of James Patterson, who went missing on 6th October 1991.

‘The family have been informed and request for privacy at this time.’