A police officer has been caught redhanded extorting money from a teenager in Delta state. 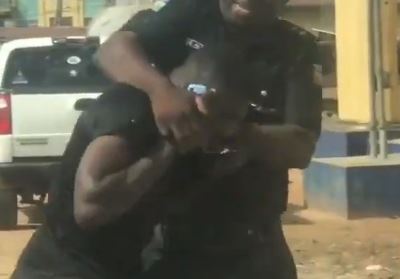 File photo
A police Sergeant identified as Nelson Onyenibe with force number 456246 may have landed himself in serious trouble after allegedly extorting N1.8 million from a teenager he accused of internet fraud.
According to Vanguard, the policeman attached to Special Protective Unit (SPU) Base 5, Benin-City, Edo State, abandoned his AK-47 rifle with serial number B11343170 and 30 rounds of ammunition before vanishing into thin air.
Onyenibe was said to be a member of a police team that accosted the teenager identified as Precious Idisi on Tuesday, August 11.
The team said to be operating in a Toyota Camry car along DSC Express Road, Ughelli South local government area of Delta State, when they waylaid the teenager and his friend, handcuffed and accused him of being an internet fraudster.
Onyenibe was said to be on special guard duty at a hotel in the vicinity at the time of the incident.
The policemen reportedly went through Idisi’s phone, including his bank statement. They were said to have transferred N1.8 million from the teenager’s account.
Idisi, who reported the matter at the Ebremede Police Division two days after the incident, said that the money was part of N2 million sent to him by his elder brother living in Germany for the burial ceremony of his late father.
A security source from the Ebremede police division confirmed the incident to Vanguard on Sunday saying:
“According to the victim, the amount was part of N2million sent to him by his elder brother residing in Germany to be used for the funeral rites of their late father.
They were subsequently taken to a Point Of Sale, POS operator identified as Ofuya Faith at PTI junction where Precious was compelled to forcefully make a withdrawal of N1.8million.
“Upon reporting the matter at the police station, the DPO directed the Divisional Crime Officer I, DSP Yerimah Ikerodah in the company of another policeman to go and arrest the suspect.
“Unfortunately, on arrival at the hotel where the suspect was stationed, DSP Yerimah began negotiating for a share of the money with the suspect, an incident that led to the sergeant escaping after jumping the fence of the hotel leaving his rifle and ammunition behind.
“However, DSP Yerimah has been issued with a query for disobedience to lawful order, discreditable conduct and sabotage while the salary account of the fleeing sergeant has been frozen with the POS operator equally arrested and detained pending further investigation.”
Though the State Police Public Relations Officer, Onome Onowakpoyeya could not be reached for comments when contacted, the security source stressed that the police has also launched a manhunt for the fleeing police sergeant and his accomplices.
Speaking on the incident, an Urhobo youth leader who earlier brought the matter before the DPO, Efemena Umukoro, said the activities of policemen extorting money from private individuals in the state is fast becoming a regular occurrence adding that the state commissioner of police has ordered for a full-scale investigation into the incident.
Top Stories