Katiuscia Silva Mota was at home in the São Diogo neighbourhood of Serra, Brazil, when the incident happened. 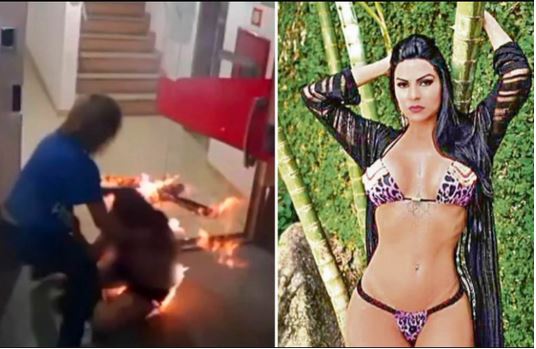 Shocking video footage shows the moment a Brazilian model accidentally set herself on fire after arguing with her girlfriend.

Katiuscia Silva Mota, 31, was at home in the São Diogo neighbourhood of Serra, Brazil, when the incident happened on Monday, August 10.

She suffered burns to almost half her body.

Katiuscia had reportedly argued with her partner prior to the incident. The fire is thought to have been caused by lighter fluid.

Security cameras in the building show her appearing to argue with her partner outside of the home before Katiuscia returns inside the building, followed shortly after by her girlfriend, who appears to struggle to gain re-entry into the property.

Moments later, Katiuscia can be seen running out of the building with part of her body on fire as her girlfriend and others attempt to contain the flames.

The model was taken to the Jayme dos Santos Neves Hospital in Serra. She suffered 40 per cent burns to her body but is said to be in a stable condition.

Katiuscia's mother said she does not believe her daughter purposely set herself on fire and that it may have been caused by a cigarette.

Police are now investigating the incident.