It was reported that one of the officers shot the boy on the leg because he impregnated a girl and went away with him while he was bleeding profusely. 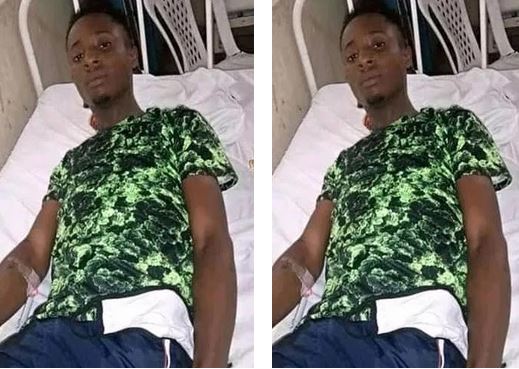 Unless three different surgeries are urgently conducted on the left leg of Ledesi Kote, a 19-year-old boy who was shot by a police officer for impregnating a girl, according to doctors ,the young man may lose the leg to amputation.

According to Kote, the father of the victim, He was in his compound in K. Dere community in Gokana local government area of Rivers State on Friday, August 21, 2020, around 7am, when a Sienna drove into his compound with about four armed police men.

“They went straight to my son’s room door and were banging and cocking guns. I approached them to inquire from them what my son did wrong that they were looking for him, but none of them answered me. It was one of them who angrily told me that my son impregnated a girl.”.

According to the victim’s father, the next thing he heard from the backyard of his house was a gunshot.

He said one of the officers shot his son on the leg simply because he impregnated a girl and went away with him, while he was bleeding profusely and hid him in a private hospital.

Comrade Karl Uchegbu, South-South Zonal Chairman of Civil Liberties Organizations quoted an unnamed human rights activist in the area as stating that, he and other lovers of justice took the father to the Rivers State Police Command headquarters on Moscow road in Port Harcourt, where an official complaint was laid down about what their officers did to an innocent boy, whose only crime was because he impregnated a girl.

It was learnt that arrangements were made for the immediate transfer of the victim from the village to a better government owned hospital in Port Harcourt.

Another activist who witnessed the incident regretted that, ”until now, the officer who did this is yet to take full responsibility of the medications. The doctor said the victim will have to undergo three different surgeries or else he might be amputated. We want justice for this boy. It could be me or you tomorrow”.

At the time of filing this report, the Rivers State Police Command headquarters is yet to react to the incident, especially the allegation that a Police Officer shot a boy.