Troops discovered a bomb-making factory belonging to the group after members surrendered. 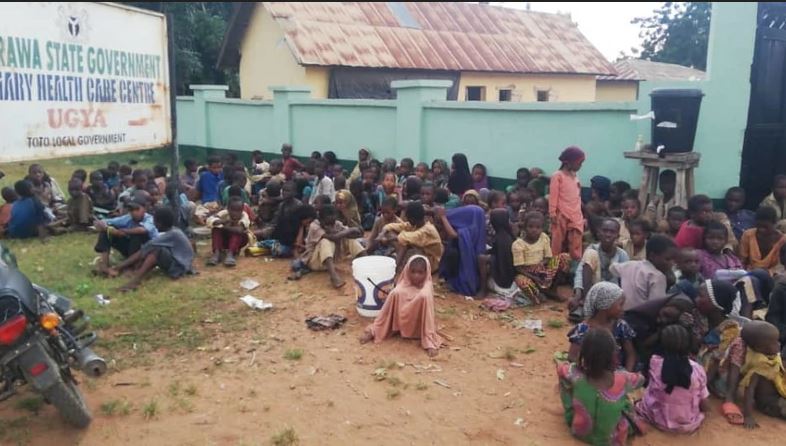 The members of the sect who surrendered to the military [DHQ]

The military says 410 members of Darul Salam, identified as a terrorist group, surrendered to troops of Operation Whirl Stroke in Nasarawa this week.

According to the Coordinator of Defence Media Operations John Enenche, the surrender followed “aggressive intensive kinetic operations at identified bandits’ enclaves” by a military unit, Operation Whirl Stroke, and other security agencies deployed at Uttu in Toto Local Government Area of Nasarawa State.

Eneche who disclosed that the terrorists' bomb-making factory was also destroyed, added that among the surrendered terrorists were women and children.

IN NASARAWA, AS 410 MEMBERS OF DARUL SALAM TERRORISTS GROUP SURRENDER

1. In continuation of aggressive clearance operations aimed at decisively riding the North-Central zone of armed banditry and other forms of criminality, troops of Operation WHIRL STROKE have recorded a major success against the criminal elements.

2. Following aggressive intensive kinetic operations at identified bandits’ enclaves, not less than 410 members of the Darul Salam Terrorists group, including women and children, surendered to the troops of operation WHIRL STROKE and other security agencies deployed at Uttu in Toto Local Government Area of Nasarawa State. This development took place on 25 August 2020.

3. Relatedly, troops of Operation WHIRL STROKE while on a robust clearance patrol around Uttu, on 26 August 2020 stormed a Darul Salam terrorists bomb-making factory following actionable technical and human intelligence on the activities of the terrorists in the general area. In the course of the operation, troops recovered several Improvised Explosive Device making materials at the location including 2 scales, 6 rocket launcher bombs, one bag of fertilizer, half a bag of gun powder, 10 locally made hand grenades, one Rocket Propelled Grenade bomb fuse, one locally made Rocket Launcher, 2 Improvised Explosive Devices,13 Improvised rocket bombs, amongst others. The camp was subsequently destroyed while troops are equally combing the surrounding forests for fleeing members of the sect.

4. The Military High Command commends the gallant troops of Operation WHIRL STROKE for their professionalism and dexterity in achieving this notable feat and also urges them to sustain the tempo in the push to decisively curtail the activities of armed bandits and other criminals operating in the North-Central zone.

5. You are please requested to disseminate this information through your medium with the photos attached for the awareness of the general public. Thank you for your usual support and cooperation.