Late Dapo Williams' first son, Tolulope and daughter Timi were embarrassed and prevented from performing their last rites to their father. 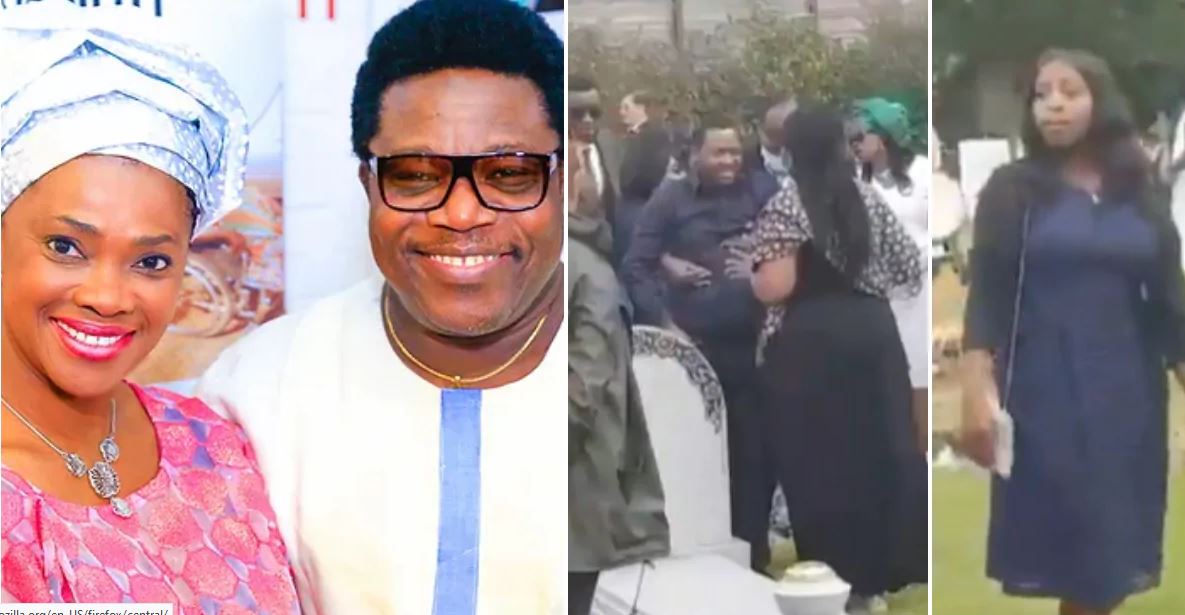 A shocking video showed the moment Tina Oshun, the current wife of late Dapo Williams chased his first son and daughter from paying their last respects to their father is currently trending online.

Dapo Williams was a philanthropist, the leader, the leader and pioneer of Nigerian Think Tank Group, a member of the All Progressives Congress and Buhari Campaign Organization in the UK.

The video showed some people decked in white and green on the burial site, while some were donned in black attires.

Some noises were soon heard in the background and it was that of the first son called Tolulope being persuaded by some people on the burial site to stop talking.

According to him, his father's wife does not want him there. Angry, he started protesting it and that was when people surrounded him and told him to be calm.

A lady called Timi, who seemed to be Tolulope's sister, was also not allowed to pay her last respects to her father. When she was asked the reason by by-standers, she just muted that it was okay.

The voices of some guests who seemed to be familiar with the family were heard in the background and they kept saying how it was wrong for the deceased's wife to send them away from performing their rites.

According to them, Williams is their father.

Meanwhile, soon after Tina and her only daughter left the burial site, Tolulope and his sister Timi were allowed to pay their last respects to their father by some goodhearted aunties who witnessed the first scene.

The video showed Tolulope shedding tears as he muttered some things at his father's grave while pointing inside it.

Current wife of Late Dapo Williams chases the first son and the first daughter of the deceased from performing burial rights of their late father. What??? Chase me away from my father’s burial? Aaaaaaaaaaaaaaaaaaaah! Ok.... No comment. Anyways, we can never just conclude like that. There are always so many untold family stories. So let’s not judge.

'Don't Tattoo Me on Your Body, Buy Me a Range Rover' - Actress, Lily Afegbai Begs Her Fans (Video)
Recent Stories