Following her wonderful DJ performance on Saturday, a man has asked Pepsi to replace DJ Cuppy with DJ Switch. 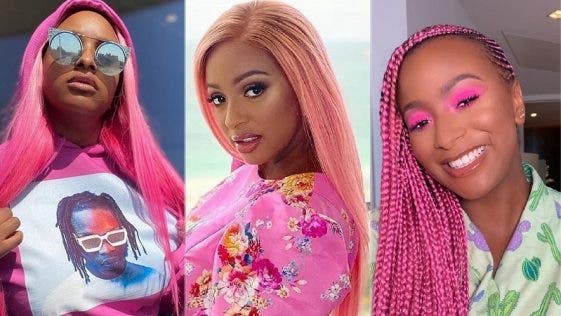 DJ Cuppy
Nigerian Disc Jockey, DJ Cuppy has broken her silence after a Twitter user begged Pepsi to replace her with another female DJ Switch.
Recall that DJ Cuppy is a brand amabassador of Pepsi. DJ Switch was exceptional and won the hearts of Nigerians on Saturday after making BBNaija housemates dance happily during the party.
The man simply known as Chigozie had asked Pepsi, an international conglomerate to which Cuppy is an ambassador to consider dropping her and signing fellow female Disc Jockey, DJ Switch in her place.
“DJ switch Pepsi pls replace Cuppy!” he wrote.
Reacting to the request by Chigozie, Cuppy said Pepsi deciding to drop her is something that can never happen as the company loves her.
She, however, added that what would be a better alternative would be for DJ Switch to join her as an ambassador, saying that they need to add more females.
“REPLACE? No, Pepsi loves Cuppy too much, so this can never happen. Sign ASWELL? Yes, they certainly should add more females! Blue heart #CuppyDat” she tweeted.

REPLACE? No, Pepsi loves Cuppy too much, so this can never happen. Sign ASWELL? Yes, they certainly should add more females! 💙 #CuppyDat https://t.co/EKvFwIY8Hv