Plans by Multichoice to sack Nigerians workers have been rebuffed by the federal government. 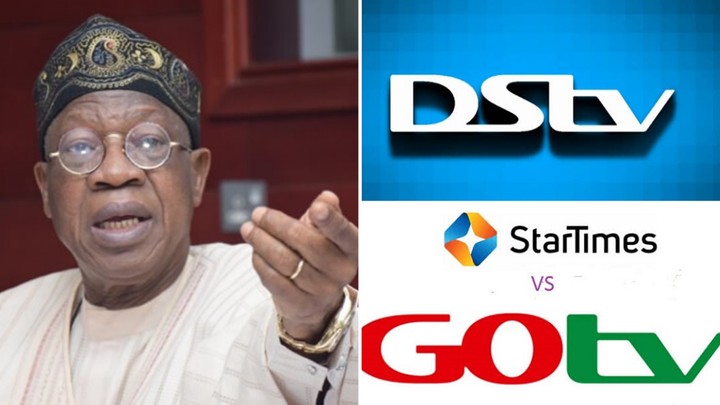 The Federal Government has said it will not allow DSTV sack Nigerian workers under any guise
The Federal Government has warned South African company, Multi­Choice it will not tolerate plans by the company to lay off Nigerian workers in its employ under any guise.
Daily Independent reported that this followed a meeting between the management of the National Broadcast­ing Commission (NBC) and the management of Multi­Choice on Monday.
The commission had summoned MultiChoice over the planned increase on some DStv and GOtv packages which takes effect from today despite a similar increase three months ago.
According to Multi­Choice, in a message to sub­scribers, DSTV Premium would move from N16, 200 to N18,400; Compact Plus from N10,925 to N12,400; Compact from 6,975 to 7,900, and for users of GOtv Max, they would have to pay the sum of N3,600 from 3,280.
The latest increase comes amid a subsisting order of the House of Representa­tives seeking a stay of action on the earlier hike which the company blamed on the Federal Government’s 2.5 percent increase in Value Added Tax (VAT) from five to 7.5 percent.
John Ugbe, the Chief Ex­ecutive Officer of the com­pany, said the decision to in­crease the prices was made after a careful consideration of the market and a review of its business operations.
He noted that the com­pany reviewed its prices while considering financial impacts, including inflation, increased content and oper­ational costs, so they could continue to survive as a business and bring quality entertainment to custom­ers.
He said: “To arrive at the decision to adjust prices, we took into account many fac­tors, including the impact on the customer, current inflation, which stands at 12.82 percent, the highest in 27 months, content costs and efficiencies within the company.
Only the prices of some of the bouquets have been reviewed upwards while the lower bouquets have been left untouched.”
The planned increase, which did not go down well with many Nigerians, had prompted the NBC to sum­mon the management of MultiChoice and Startimes, which also increased its tar­iff in August, to a meeting yesterday.
Speaking exclusively with Daily Independent on what transpired at the meeting yesterday, Arm­strong Idachaba, the Director-General of the National Broadcasting Commission (NBC), said the manage­ment of the MultiChoice cited currency devaluation and inflation rate as some of the reasons that necessitat­ed the increase.
He also said the compa­ny said it might be forced to sack Nigerian workers in its employ, a development the Nigerian government vehe­mently kicked against.
According to Idachaba, “They said they are com­mitted to keeping their business in Nigeria but are affected by currency devalu­ation and inflation rate.
“They said their fears are that they may lay off Nige­rians in their employment if they have to remain in business.
“They gave examples of other companies that are folding up because of eco­nomic challenges.
"At the end of the day, we told them that no matter the excuse they have, we are not going to tolerate any loss of jobs. We frown heavily at any attempt to lay off Ni­gerians because of these excuses.
“Secondly, we are not tolerating any unnecessary price hike. We asked them how they intend to do the increase and they said they wanted to start with the Pre­mium and then move gradu­ally to the other packages.”
Top Stories