Nigerian Man, Mathias Ometu Who Was Arrested By Texas Police While Jogging Speaks On Ordeal (Video)


It was the first time he made a public comment on his arrest. His lawyers and family attended the press conference. 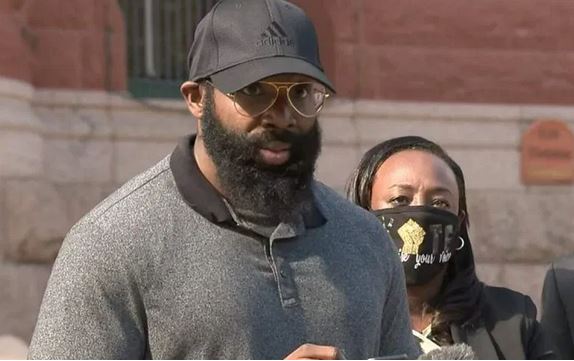 The Nigerian American identified as Mathias Ometu, who was illegally arrested by San Antonio Police in Texas last week said that he “was physically, emotionally and mentally harmed”, during the arrest.

He also described the two days he spent in jail as days of ‘darkness’.

Ometu spoke today on the steps of the Bexar County Courthouse in San Antonio.

He urged the authorities the address his arrest and unjust treatment by the SAPD.

“I was guilty before proven innocent,” he said.

He also called for the retraining of the policemen who arrested him.

It was the first time he made a public comment on his arrest. His lawyers and family attended the press conference.

The 33 year-old insurance executive, was jogging on 25 August, when he was accosted by the police, who said he matched the description of a suspect wanted in connection with domestic violence.

He said while jogging near Interstate 10 and Woodstone Drive, he noticed a police car slow down by him before speeding past him and turning back around toward him.

Ometu said he felt targeted by the police, who were looking for Darren Smith Jr., who was arrested Friday on an unrelated robbery warrant.

Smith has not been charged in connection with the family violence incident. And as it turned out, Smith does not bear any resemblance with Ometu.

When police told Ometu they wanted to take him to the apartment complex so the victim would identify him as the suspect, he persisted on remaining where he is.

“Once those doors close on you, you never know when they’re going to open again,” Ometu said.

He denied kicking the policemen, contrary to their claims.

Watch the press conference below: