BBNaija: Nengi Fan Tattoos Her Name On His Wrist (Photo)


The supportive fan revealed a snap of the new tattoo he got, as he inked Nengi’s name on his skin. 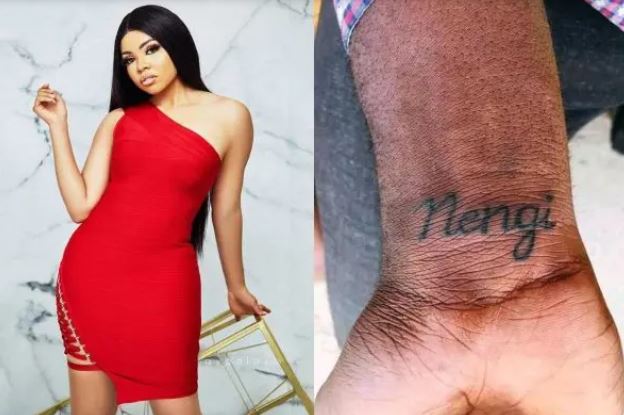 Nengi Fan Tattoos Her Name On His Wrist

A huge fan of Big Brother NaijaLockdown housemate, Nengi showed his support and love for her as he tattooed her name on his skin.

Fans are going all the way to support their favourite on the show.

Taking to Twitter, Martin Machego, who uses the handle @MachegoMartin, revealed a snap of the new tattoo he got, as he inked Nengi’s name on his skin.

His revelation came as a delight to many fans of the reality TV star, as they hailed him for such bravery.

See The Snap Below;

The kiddwaya’s Stan can be seen on Facebook, pleading with his followers on social media to support and vote Kiddwaya who is up for possible eviction alongside Nengi, Laycon, Vee and Lucy.

“Don’t look at my face, look at the name on my head. Vote Kiddwaya #wayademgang” he captioned the photos.

'Save Me' - Veteran Nigerian Singer, Baba Fryo Cries Out For Help As He Battles Depression
Recent Stories