BBnaija Organisers Ignore Erica After Her Disgraceful Exit From The Show


Nigerian actress disqualified from the BBNaija lockdown show has been abandoned by the organisers of the show. 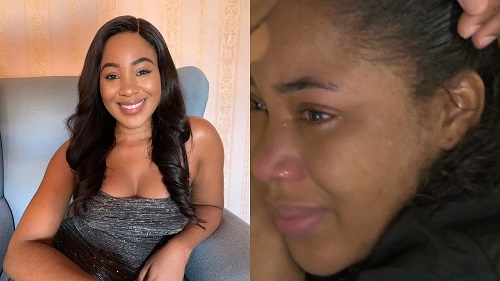 Erica
Following her disgraceful exit from the Big Brother Naija Lockdown show, Erica Nlewedim has been ignored by the organisers and Ebuka Obi-Uchendu.
Unlike the courtesy accorded evicted housemates who are introduced to the audience and taken on tours, the Abia-born actresswas not interviewed on Sunday.
Recall that the organizers sent the actress packing, after she was issued a third strike.
Before this weekend, Erica had two strikes. Biggie issued her the first for whispering and speaking in codes while communicating.
She was given a second strike for sleeping in the HoH room until 3am with Kiddwaya.
Then, on Sunday morning, she poured water on the HoH bed, to prevent her Deputy, Prince, from sleeping in it.
This contravenes Biggie’s rules, which stipulates both Head of House and their deputies must sleep on the same bed for the week.
After she was eventually disqualified, Erica was not allowed to make any remarks in a live interview with Ebuka, as it is with the show’s tradition.
It is understood that the organizers will not allow her do official media rounds with sponsors.
She becomes the fifth Big Brother Naija housemate to be disqualified in the history of the show, after  Kemen, Khloe, Kbrule and Tacha.
Top Stories