APC's fall in Edo State might not just be about Obaseki, Iyamu and Oshiomhole alone, it could be more about the president and his performance in recent times. 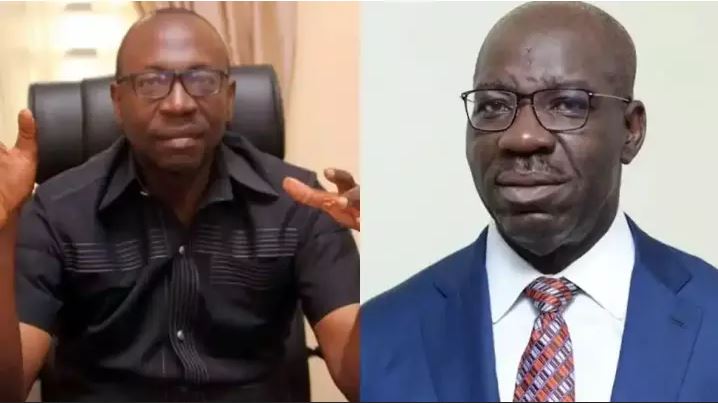 The governorship election in Edo State was originally a local one. This means that it should only attract the interest of the Edo citizens and other political pundits or enthusiasts. But at the end of the day, it looked like a national event that attracted widespread interest and massive celebrations across the country.

Governor Godwin Obaseki of the Peoples Democratic Party, PDP battered Pastor Osagie Ize-Iyamu of the All Progressives Congress at the polls for the second time in 4 years, without mercy. The humiliation was similar to the 8-2 defeat of Barcelona in the hands of Bayern Munich at the recently concluded Champions League. It is the kind of defeat that makes you reconsider your political career, especially considering the resources at the disposal of the loser. Obaseki gallantly polled 307,955 votes, while Iyamu, the supposed grassroots politician trailed him with 223619 votes. Mathematically speaking, there was a margin of 84,336 votes between them, in an election that divided the best of political analysts and pundits due to the expect stiff competition.

Obaseki went into the election with a depleted army. With just weeks to the event, about 42 of his aides had already defected from his camp to join the APC. These included two three commissioners, 24 special advisers, three board members, three commission members, six LGA officials, one Chief of Staff, one campaign team director, and one chief press secretary. But Obaseki still cruised to victory against all odds. What really happened? How did it happen?

The truth is that we might never really know. Social Science is not like the Physical Sciences where you can get the same results if you mix the same chemical substances together 100 times. Human behaviours are difficult to determine. This doesn't stop us from attempting to diagnose the problem, at least, at the surface level. There are many factors that accounted for the poor performance of the APC in that outing.

Yes, Obaseki is loved, the antics of former governor Adams Oshiomhole and Asiwaju Bola Ahmed Tinubu (the godfathers) irked the people of Edo State, the personality of Iyamu who has a loyalty challenge and other factors that could have built up the displeasure of the electorate against the APC.  I want to use this juncture to look at the bigger picture. The Edo election was more of a referendum on the President Muhammadu Buhari-led APC administration and this is evident in the massive celebrations across the country. The Nigerian social media space was literally set on fire. It was like Christmas!

The election was just an avenue for the common people to express their approval and disapproval of the present state of affairs in Nigeria. Is it not mind-boggling that Nigerians are now siding with the PDP which was accused by the APC of grounding Nigeria? Years back, Nigerians were beginning to see the PDP as a plague, but in 2020, things are beginning to change. It is not as it the PDP is now trusted, its about protest votes.

I have always emphasized that the current administration has long abandoned governance to focus on politics. There is no sector that has witnessed reasonable growth that is capable of transforming lives in the last 5 years. The flowery messages of the progress of the APC disseminated via the mass media channels are sponsored. Those that facilitate them know the truth but they need to do their jobs and feed their families.

The security architecture is collapsing with local armed conflicts, banditry and insurgency are crippling economic activities in the northern part of Nigeria. Food prices have been heading up like a rocket, the unemployment rate is high, corruption is still striving; only the players have changed, freedom of expression has been limited with harassment by security operatives and court cases.

The coronavirus pandemic has added salt to the fresh injuries of Nigerians. It caused a shrink in our GDP, loss of jobs and other accompanying economic challenges. As Nigerians battled with the effects, the ruling elites focused on the business side of the pandemic. State governors have been falling over each other for COVID-19 intervention funds. Governor Abdullahi Ganduje didn't rest of his oars till he squeezed N5 billion out of the Federal Government. Now he claims to have flattened the curve with an appalling testing record. The coronavirus palliatives have ended up in the pockets of those who have more than enough. People hear of massive financial disbursements from the pages of newspapers and it ends there. It took the church in Nigeria to dish out the real palliatives and save lives.

As Nigerians grappled with the cash-crunch which has even affected their relatives abroad, who used to support them with foreign exchange, the government came up with anti-people policies again.

With a short time frame, DStv, a Sub-Saharan African direct broadcast satellite service owned by MultiChoice increased tariff. As if that was not enough, the Nigerian Electricity Regulatory Commission (NERC) increased electricity tariff from 30.23 Naira for one kWh to as much as 62.33 Naira per kWh. The pump price of fuel was later increased by the Pipeline and Product Marketing Company (PPMC) N151.56 per litre with effect from September 2, 2020. Majority of the protest movements organized by the people have been thwarted by security operatives. The Nigeria Labour Congress and the Trade Union Congress appear to be fighting a lost cause to pressure the government into a reversal of the hikes.

Nigerians no longer have a say in the affairs of their country. The elites who are shielded from the economic hardships with their loot. The people simply found a way to express themselves legally through the ballot. From the look of things, the APC might always lag behind if the electoral body, INEC organizes free and fair contests.

The morale of APC is low presently. The party will be heading to another governorship election with the psychological trauma of defeat and the possibility of another one. This the mental state of a professional boxer coming off a defeat. Heavyweight boxer, Deontay Wilder who lost to Tyson Fury earlier this year might be in a pole position to explain this better. Ondo State could suffer the contagious effect of defeat. The electorate might be tempted to go the Edo way. The opposition parties will also be energized and motivated, knowing fully well that APC can be defeated roundly.

A defeat is very possible in Ondo if the PDP and the Zenith Labour Party could go into an alliance. Agboola Ajayi is a popular politician, but ZLP has no structure. The popularity of Jegede needs re-evaluation. It is hard to put a figure to it, considering the fact that his godfather, Olusegun Mimiko is no longer behind him. If both parties come together, Governor Rotimi Akeredolu of the APC might be giving a run for his money. With the current morale of the APC and disaffection amongst the people, the election might go against the ruling party. October 10 is the slated date and Nigerians will be eagerly hoping for a bold statement to be made.

The people have spoken and I hope Buhari and his party members are seeing the bigger picture. APC's fall in Edo State might not just be about Obaseki, Iyamu and Oshiomhole alone, it could be more about the president and his performance in recent times.