According to NIDCOM, Nigerians came into the facility, started behaving unruly and ignoring the COVID-19 protocols of having only 10 persons in a room. 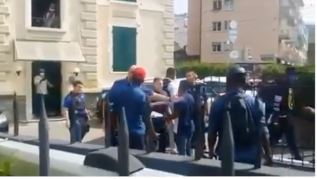 The Nigerians in Diaspora Commission has debunked claims made in a viral video that staff of the Nigerian Embassy in Switzerland called the police to arrest Nigerian citizens.

On Tuesday September 22, a video surfaced online in which a Nigerian man claimed the embassy staff sent in police officers to arrest them when they visited the embassy for some documentation. Some of the Nigerians who were heard shouting on top of their voices, alleged that they had already made payments for their passports to be renewed but the embassy failed to fulfill the service they paid for.

Reacting to the video, the Head of Media at NIDCOM, Abdulrahman Balogun, denied claims.

In a statement released on Wednesday September 23, Balogun said the Nigerians came into the facility and when they started behaving unruly and ignoring the COVID-19 protocols of having only 10 persons in a room, the Embassy's protection unit were invited to restore order. He denied claims that police officers were invited to arrest the Nigerians

"VIDEO ON THE ALLEGED ARREST OF NIGERIANS AT THE EMBASSY IN SWITZERLAND- THE FACTS Abuja, Sept. 23, 2020:

In view of the above video it is imperative to state the facts.

In line with Covid-19 protocols, the Embassy in Bern. Switzerland is only allowed to attend to 10 applicants, however, the Mission made it possible to attend to a maximum of 20 daily, spacing out the appointments. But on this day, 64 Nigerians besieged the Nigerian mission in Bern. Only 10 of them were on scheduled appointment.

While the Nigerian Amb. Baba Madagu was addressing them, they barged in through the front door and overcrowded a hall that was meant to receive only 10 people at a time.

The mission did not call the Police as erroneously stated in the video but invited the Embassy Protection Unit to bring calm and decorum back to the hall. The men of the Embassy protection unit addressed them and those on appointment as well as those who had made their online payments were attended to while others were advised to follow the due process, with an assurance that everyone will be attended to as long as the rules were followed.

We appeal to Nigerians abroad to be good ambassadors of Nigeria wherever they are and obey laws put in place.

The Nigerian mission in Bern is still attending to Nigerians who follow the process, pay online and book their appointments as stipulated.''