The plane came down about 2km (1.2 miles) from a military airport in the town of Chuhuiv, the emergency ministry officials say. 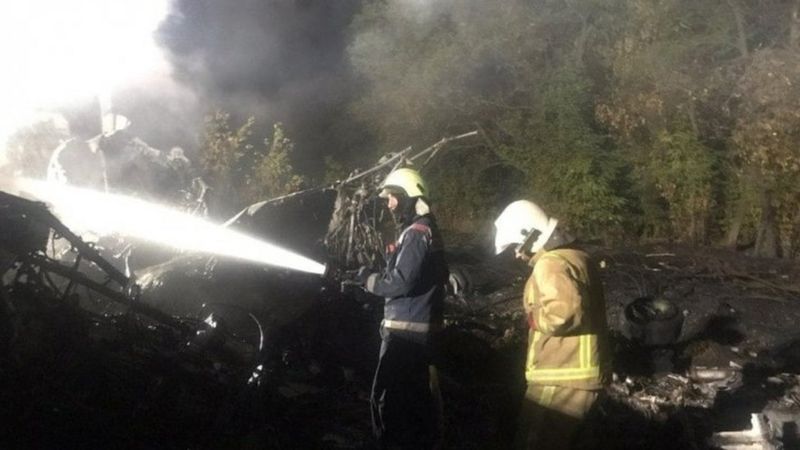 According to the BBC, officials say that at least 22 people, most of them air cadets, have been killed in a military plane crash in Ukraine.

The aircraft, an Antonov-26, came down near the eastern city of Kharkiv as it was landing.

The plane was carrying cadets from Kharkiv Air Force University and was on a training flight. Emergency ministry officials say 27 people were on board.

Two were seriously injured, and a search operation is continuing into the night for three missing people.

The cause of the crash is being investigated.

The plane came down about 2km (1.2 miles) from a military airport in the town of Chuhuiv, the emergency ministry officials say.

There is no suggestion that the crash is linked to the conflict in eastern Ukraine. Chuhuiv is about 100km (60 miles) from the front line where government forces are fighting pro-Russian separatists.

Fire broke out at the site and was later extinguished.

"It's a shock," Deputy Interior Minister Anton Gerashchenko told AFP news agency. "At the moment it's impossible to establish the cause."

An investigation is under way. President Volodymyr Zelensky is due to travel to the region on Saturday.

Kharkiv regional governor Oleksiy Kucher said preliminary information suggested that one of the pilots had reported failure in one engine before the crash, but that this should not have been a critical situation, according to the Interfax-Ukraine news agency.

An eyewitness told Reuters news agency he had seen a man in flames running from the wreckage.

"Another car stopped behind us. We took a fire extinguisher and ran with another driver to help him," he said.