A man has been arrested and is facing trial after he allegedly killed his parents and used them for stew. 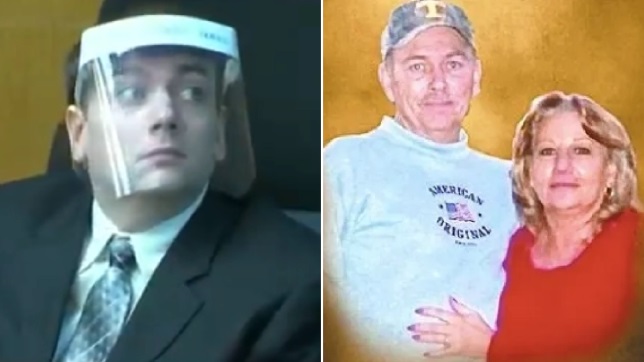 Joel Guy Jr killed his father and mother before using them to cook stew
A workshy son murdered and dismembered his parents then cooked up a ‘diabolical stew of human remains’ using their body parts, a court heard.
Joel Guy Jr allegedly knifed his dad Joel Sr, 66, and mom Lisa, 55, to death during Thanksgiving 2016, before chopping them up and trying to dissolve them.
Speaking at Guy Jr’s trial in Knoxville, Tennesee, Monday prosecutor Leslie Nassos said: ‘The killer put Lisa’s body parts in one, and Joel’s Sr’s in another, and then he covered them with a corrosive substance, and left them there to liquefy into some sort of diabolical stew of human remains.’
Nassios gave horrifying details of exactly how Guy Jr, 32, allegedly sliced his parents apart, separating their limbs from their torsos. She told of how he had ‘broken off’ Lisa’s head from the atlas of her spine, before sticking most of their remains in blue plastic containers which he then filled with acid.
Explaining what Guy Jr allegedly did with his mother’s head, Nassios said: ‘And then, the killer took Lisa’s head and carried it downstairs, and took it into the kitchen. He got out a stockpot, placed her head in the pot, filled it with liquid, carried it over to the stove, covered it, turned on the stove, and left it there to cook.’
Nassios added: ‘This was a monstrous crime.’ Guy Jr is also said to have plotted to use his father Joel Sr’s severed hands to try and cover-up his fingerprints at his family’s blood-soaked home in Knoxville, Tennessee, following the November 2016 murders. Knox News reporter Jamie Satterfield, who live-tweeted Monday’s hearing, said Guy Jr, 32, had killed his 66 year-old father first, stabbing him 40 times while his mom was out.
After Lisa Guy, 55, returned, she was killed after being knifed more than 30 times. Nassios alleges Guy Jr slaughtered his parents after they confronted him about his never-ending studies, and told him they were withdrawing financial support. The suspected killer is said to have hoped to get his hands on a $500,000 life insurance package, with at least one of the killers’ siblings confirming he’d been on the verge of having his allowance cut-off.
A journal entry shared with the court is said to contain graphic details of Guy Jr’s plot, including: ‘Get killing knives – quiet, multiple…get sledgehammer – crush bones…bring blender and food grinder – grind meat’. It is also said to have revealed the motive, with an entry saying: ‘he’s not alive to claim her half of the insurance money – all mine $500,000.’
Guy Jr – who appeared in court Monday wearing a clear face visor – is accused of attempting to dispose of his parents bodies by chopping them up and placing parts of their remains in Tupperware boxes.
Detective Jeremy McCord, who was first on the scene, found gallons of acid and cleaners strewn around the house in an effort to dissolve the Guys’ corpses. He said the heating in the Guys’ home had been ramped up, and branded the crime scene the worst he’d witnessed in his career.
Another entry say Guy Jr discuss how getting rid of his parents bodies would provide an alibi. Guy Jr is said to have killed his parents a day after arriving for Thanksgiving dinner.
Lisa Guy’s colleagues raised the alarm after she failed to turn up for work the following Monday, with McCord discovering what he called a ‘house of horrors’ after being asked to perform a welfare check at their address.
Knox County Sheriff’s Office say they have receipts for items Guy Jr bought and which were later found at the murder scene. Guy Jr is said to have confessed to the killings after his initial arrest, but has since denied murder. His trial continues.
Culled from Metro UK.
Top Stories