Ondo 2020: Many Injured As PDP And APC Supporters Clash Ahead Of Governorship Election


There was bloodshed in Ondo state as supporters of the All Progressives Congress and rival Peoples Democratic Party clashed. 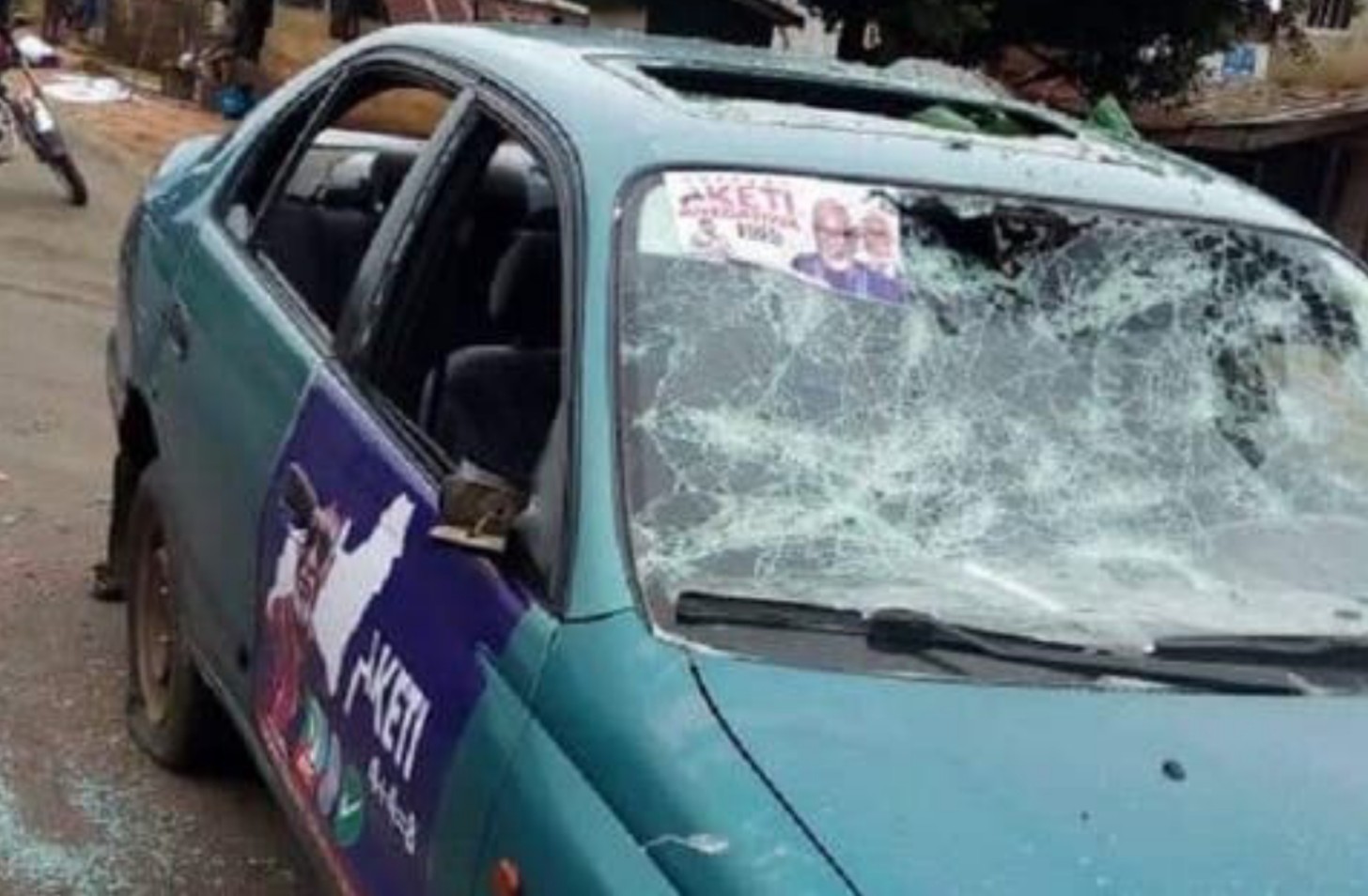 One of the cars damaged in the fight
Many people were left seriously injured as supporters of the All Progressives Congress(APC) and the Peoples Democratic Party (PDP) clashed on Tuesday at Ipele and Owo towns.
The incident also left many vehicles damaged.
Both parties have confirmed the clash, with each accusing the other of masterminding the attacks.
A statement by Kayode Fasua, the spokesman for the Eyitayo Jegede campaign, said the convoy of the PDP candidate, Eyitayo Jegede, was attacked in Ipele and Owo township in Owo Local Government “by heavily armed APC political thugs.”
He said a PDP member, Amuda Sikiru, was shot in the face and abdomen during the party’s campaign rally in Owo town by the APC thugs.
Mr Fasua also said the victim was rushed to the state’s specialist hospital in Akure.
According to him, two other PDP supporters, Taye Akintufede and Seun Ogunlade, were also shot.
“Besides, some of our campaign vehicles were damaged, as was witnessed in Oba-Akoko community recently,” the PDP campaign spokesman said.
“One of the convoy’s campaign trucks was completely burnt down.
“Earlier in the day, the same APC armed hoodlums had blocked the entry point to Ipele community, Jegede’s maternal home, and attempted to turn back the campaign team.
“This spate of attacks on our members by the ruling party in the state is threatening the peace of the state, and is apparently intended to cause violence ahead of the October 10 governorship election.”
But the Akeredolu campaign spokesman, Olatunde Olabode, disputed the claims.
He said Jegede “ordered his thugs to unleash coordinated attacks on the innocent people of Ipele and Ijebu in Owo local government area.”
“Our people were traumatised with the sound of gunshots sporadically by Eyiyato Jegede’s thugs in Owo today,” Mr Olabode said.
“Earlier today, on our way to Akoko Southwest in continuation of our local government campaign in Akoko South-west, we noticed that all our billboards and banners have been destroyed at Emure junction.
“Sensing that the PDP might be in the main town, Governor Oluwarotimi Akeredolu ordered his campaign convoy to take another route out of the town.
“Despite this, Eyitayo Jegede and the PDP still went ahead to cause mayhem in Owo by attacking innocent members of the public and anyone with APC or Akeredolu branded caps or T-Shirt.”
Olabode said “no fewer than 20 cars were destroyed and many innocent people of Ipele and Ijebu Owo injured”.
He said motorcycles were burnt “and the streets of Ipele littered with shell of bullets.”
Meanwhile, the police command in Ondo has confirmed the mayhem, promised to investigate the situation.
Top Stories