The woman opens up on how the incident occurred and laments the financial and emotional toll it has taken on her and her family. 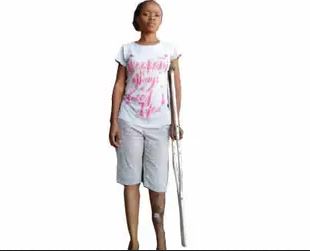 A Nigerian woman identified as Mrs Hannah Olugbodi has told her sad story after she was shot at by men of the Special Anti-Robbery Squad in Lagos State.

The woman was shot on June 6, 2018. She tells TOBI AWORINDE how the incident occurred and laments the financial and emotional toll it has taken on her and her family

When was your encounter with Special Anti-Robbery Squad operatives?

My experience with SARS was on June 6, 2018. When I returned from work before 8pm, I went to Ijesha Market to buy some pepper to prepare my son’s breakfast to take to school the next day. Unknown to me, SARS men had gone to a hotel on Agunbiade Street nearby. I heard they went there to ask whether the hotel manager was around. A worker in the hotel said no. They (SARS policemen) told the boys there that they wanted to collect money from them. The boys told them, ‘The manager is not around, you can come back later.’ From there, they started shooting. Everybody ran. I too ran. The SARS operatives came outside and continued shooting. The bullet hit me in my left leg at the place I was buying pepper.

I lost consciousness and regained it at the hospital. When I woke up, I told my husband I wanted to drink water. The doctor said they should not give me water and that there was no bed space for me. So, in my husband’s car, I was given the drip. At midnight, the hospital said they had a bed space and I was taken in. From that moment, it was my husband that signed for any treatment or surgery. I underwent three operations and it was my husband that paid. The government didn’t come or offer any help. Even the payments for the bed were made by my husband. He used everything he had and ended up broke. My sons have not gone to school since then.

Which hospital were you taken to?

I was taken to the Lagos University Teaching Hospital.

How long did you spend in the hospital?

I spent six months. But the government did not do anything for us.

Have the SARS men been apprehended?

No. They didn’t stay after shooting. They ran away.

How old is your son?

My two sons are 13 and seven years old. While I was in hospital, they stayed with my mother-in-law. My husband used to come home early in the morning because he would be with me in the hospital. The doctors always asked me to call my husband for him to donate blood, or for one thing or the other. There was a drug that they said was N16,000 and I used it for 15 days because I had an infection in my leg. He couldn’t afford it. One operation was N180,000 and I had three operations.

How much have you spent on your treatment?

My husband is in a better position to say. But the government has not even given us N5. Every week, we were paying for the bed space. We paid for everything.

Are you supposed to undergo any more operations?

Yes, I was asked to return after one year for another operation because the leg is shortened. It’s not the same length as it was originally. But there is no money, so I couldn’t go. I couldn’t even go for check-ups because we pay for every check-up. Since I was given an appointment, I couldn’t go. Even the leg is not completely healed. The bullet wound has not closed yet. When I go for a check-up, they treat it, collect money for the doctor and the clinic.

Has the bullet been removed?

The bullet didn’t lodge in my leg. I was told it was an AK-47 rifle that I was shot with. It made a hole in my bone. So, the doctors cut the bone. The doctors said if they didn’t cut the bone, it could pose a problem in the future. They cut the bone, which made my leg shorter than normal. That is why I cannot walk well. I have to use crutches.

What do you want the government to do?

I want the government to give my husband everything he has spent in LUTH. They should compensate us. Now, I can’t work and there is no shop for me. I am always inside all day, unlike before when I would go to the shop and return home in the evening. I appeal to well-meaning Nigerians to help me. But the government needs to see my leg. It is bad.