How I Almost Lost My Life While Trying To Slim Down - Actress, Nneka Nkem Opens Up


The Imo State-born thespian reveals crazy things fans do to her on social media and how she almost lost her life as a teenager. 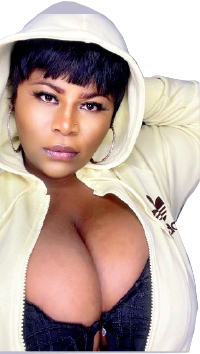 Nigerian actress, Nneka Nkem has opened up abut her personal life in a new interview.

Despite body shaming by colleagues and close pals, plus-size actress, Nneka Nkem, has never given up on her dream to be a movie star.

In this interview, the Imo State-born thespian reveals crazy things fans do to her on social media and how she almost lost her life as a teenager, while trying to reduce her weight. Enjoy it.

How did you get into movies?

I had a friend who came over to see me, she was filming at a particular place in Awka; so I said to her: ‘let me come with you, I just want to see how all these things go’. The first day I went to the location with her, I told the director that I’d love to be an actress. He said ‘okay, that’s fine’. Then, it happened that he needed an extra character for a particular role, so he asked me if I could try, and that was it.

Which movie would you say gave you the spotlight?

I had a major TV series, Mr. X Family Show, an RMD production showing on AIT at 7:00p.m every Sunday. At a particular point, there were movies I thought were going to give me the break, but the one that really gave me that break was What Other Couples Do, directed by TC Nnachi for Iroko TV. It was within that period that I started doing skits for Nedu Wazobia Show. It was also within that period that Oga Landlord comedy series also came out.

What do you like about the lead character you played in What Other Couples Do?

I fell in love with the character, Bukky because it’s something that happens in some families where the husband feels his wife is too big. I did the character of Bukky, the plus-size lady, whose husband doesn’t like because he feels she’s out of shape and too big for him. To him, she shouldn’t be seen outside and shouldn’t be allowed to express herself, because she should normally or naturally be slim. I fell in love with the character because it was another way to speak to plus-size women, to express themselves, love themselves and live for themselves, because there were times in the movie where Bukky was talked down at. A lot of times, she was crying and felt she wasn’t good enough, a lot of times she felt she could just end her life and end it all. It’s an avenue for me to say to plus-size people to love themselves, live and eat healthily. No matter how you are, you should love yourself. Self-love matters most because I’ve learned something over time that people see you through your own eyes, and the way you carry yourself is the way people relate with you. So, I enjoyed playing Bukky and it was kind of an emotional one for me. I could relate to the situation, because that’s how a lot of women feel not just in their marriages, but also in their relationships.

What crazy things have you encountered from fans since starting your career?

How was your growing up?

I had a lot of mixed feelings and emotions growing up. Being a child born into a family of seven, growing up wasn’t easy because there was a time I had complex. I’ve always been a thick child; I’ve always been a chubby baby, and I’ve always heard people calling me ‘Orobo’ and a lot of times I’ve seen myself wanting to be slim by all means; but regardless, my parents loved me the way I was. I wouldn’t say I was born with a silver spoon, but things were fine; my parents were okay, though my dad is late now. I didn’t lack anything as a child when I was growing up.

Tell us your worst experience growing up?

I had an experience where I almost lost my life in the process. I would always want to buy anything that could make me slim. Anything you bring to me and say ‘take this thing, it will make you slim in two days’, I would buy. I would find a way to get money from my parents to get it. But the last straw that broke the camel’s back was a slimming tea I bought. I bought quite a lot of those (tea) and started taking them not knowing I was doing harm to myself. One day, after taking the tea, I became weak and couldn’t speak anymore. Then I noticed I was not feeling fine. I was hiding it, because with the way I was feeling, I felt the tea was working. I lost a lot of blood; I was looking pale and became practically white. I was admitted in the hospital for about four or five days and I didn’t know I was in the hospital. I woke up and saw myself with drips on my legs, not just on my hands. My veins were all gone; I didn’t know where I was. I didn’t understand what was going on. My mom was there, sitting and I asked her what day was it and what was I doing there, what’s wrong with me. My mother said I had been there for some days. I retorted ‘some days? How?’ I didn’t even know. If I had died, I wouldn’t have known what happened to me. The doctor called me and asked if I wanted to kill myself, if I was tired of life, and I said no, I just wanted to lose weight. He said the thing I was taking had affected my hormones and asked me to stop taking them. My mother was crying, asking me to promise her I would not take those things anymore. As a matter of fact, I went through hell. Knowing I had been unconscious for days, the pain I was going through, the treatment I was getting was too much for me. Sometimes I went into rigor, feeling like I was thrown into a freezer; even if you poured hot water on me I won’t feel it. So, I decided that was it, I was never going to take any of those things again, and I was going to be myself. At that time, I was a shy person, I hardly went out. I used to have inferiority complex, but I broke away from all of those things.

What was the turning point that you felt this could be a blessing in disguise at the end of the day?

It was when I went to the university and I saw how other plus-size ladies carried themselves. I used to hear about pageantries like Miss Nigeria and the like, but I stumbled on Miss Big, Bold and Beautiful and I said ‘Oh, plus sizes too have pageants? That’s cool’. Later, I started trying to get into it and meet people. At a time, I met someone who won the pageant and we became friends. Then I told myself, ‘This is it! Enough of the times I used to feel I wasn’t good enough, enough of the times I used to feel I should be slim’.

Did you get attention from men because of your plus size?

Yes, I got a lot of attention from men who didn’t even know I was too young; and because I knew how young I was, I didn’t really date.