Tragedy struck when security operatives made up of policemen and soldiers, in a bid to disperse #EndSARS protesters, opened fire on the teeming youths at the Lekki tollgate around 7pm. 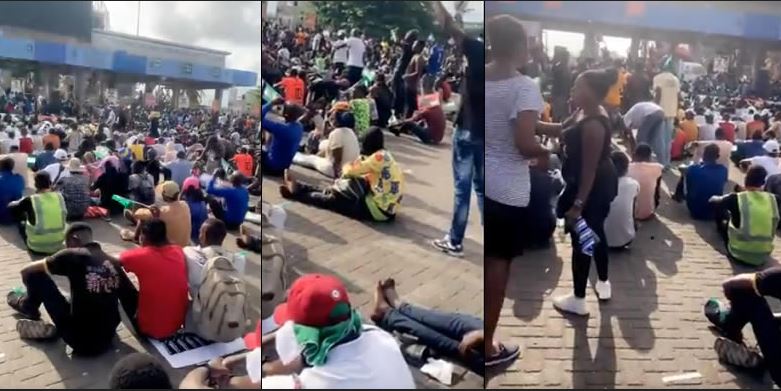 Many people were injured and others have even been feared killed after soldiers reportedly unleashed fire on protesters.

The PUNCH reports that the protesters injured at the Lekki tollgate in Lagos on Tuesday evening have been rushed to the Reddington and Lagoon hospitals in the area.

An official of one of the hospitals told The PUNCH that no dead casualty was brought to the hospitals but many injured victims were currently being treated at both health facilities.

“They are many. I can’t count my fingers around them. We are currently treating them,” the official who did not want to be mentioned said.

Tragedy struck when security operatives made up of policemen and soldiers, in a bid to disperse #EndSARS protesters, opened fire on the teeming youths at the Lekki tollgate around 7pm.

#EndSARS protesters have been demonstrating against police brutality and extrajudicial killings at the Lekki tollgate for over a week.

Similar demonstrations have been staged in different parts of the state and the country.

The state commissioner for Information and Strategy, Gbenga Omotoso, made this known in a statement after the attack.

The statement partly read, “There have been reports of shooting at the Lekki Toll Plaza, following the 24-hour curfew imposed on Lagos State to stop criminals who hid under the #EndSARS protests to unleash mayhem on innocent citizens.

“The State Government has ordered an investigation into the incident. Governor Babajide Sanwo-Olu has advised the security agents not to arrest anyone on account of the curfew, which he urges residents to observe for the peaceful atmosphere we all cherish.”