At least 28 #EndSARS protesters were injured during the shooting by security operatives in Lagos yesterday. 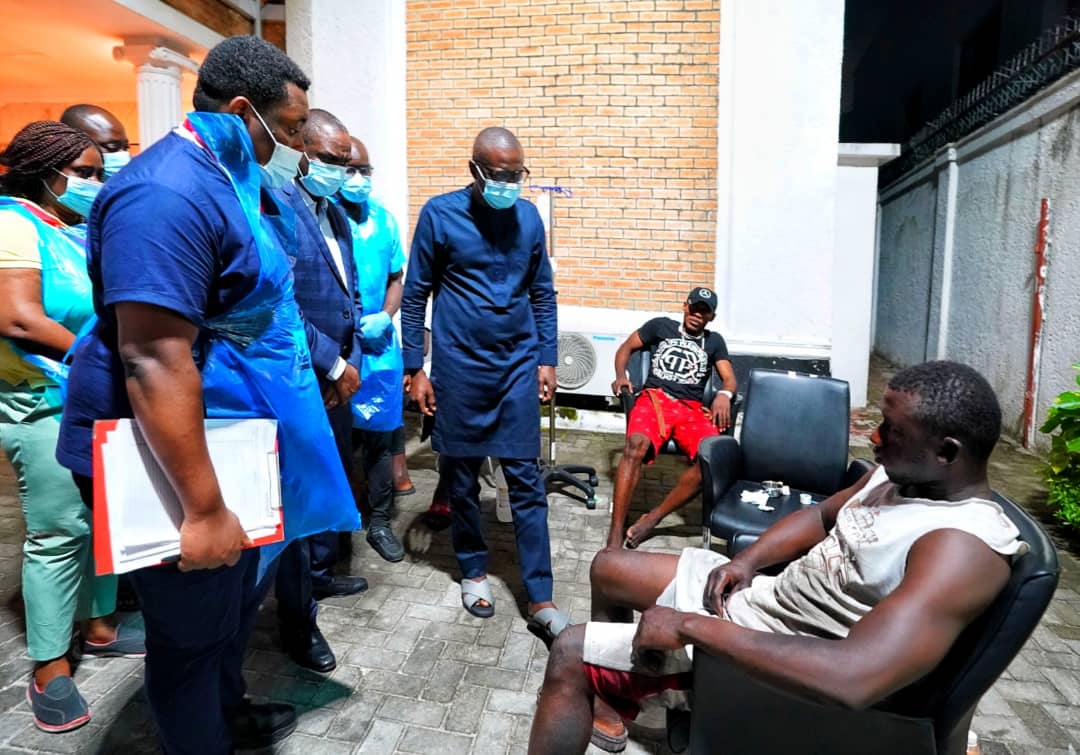 Sanwo-Olu visits victims
The governor of Lagos state, Babajide Sanwo-Olu has visited #EndSARS protesters that were fired at by security operatives on Tuesday.
He said at least 28 people were injured on Tuesday when soldiers shot at #EndSARS protesters in the Lekki area of Lagos State.
The state governor, Mr Babajide Sanwo-Olu, disclosed this in a series of tweets on Wednesday, although he was silent on the number of fatalities.
He made the disclosure shortly after he visited the victims who sustained various degrees of gunshot wounds as a result of the action of the soldiers.
Governor Sanwo-Olu explained that the injured victims were receiving medical treatment across three hospitals in the state.
According to him, 10 victims are being treated at the General Hospital, 11 at Reddington, and four hospitalised at Vedic medical facility.
The governor confirmed that the victims sustained mild to moderate levels of injuries, but two were receiving intensive medical care.
He added that three patients have so far been discharged from the hospital, while 25 others were on admission at the time of this report.
On why it took him long to react to the shooting, Governor Sanwo-Olu said he had to prioritise the welfare of the victims of the unfortunate incident.
“This is the toughest night of our lives as forces beyond our direct control have moved to make dark notes in our history, but we will face it and come out stronger,” he said.
The governor also gave an assurance that the state government would continue to monitor and ensure that all the injured victims were given the best care.
See his tweets below:

This is the toughest night of our lives as forces beyond our direct control have moved to make dark notes in our history, but we will face it and come out stronger.

I've just concluded visits to hospitals with victims of this unfortunate shooting incident at Lekki . pic.twitter.com/r5idAn9Pxw

It has taken me this long to make a statement because I have to prioritize the welfare of the victims of this very sad incident. pic.twitter.com/jH18PPXnkr

There are currently 10 patients at the Gen Hospital, 11 at Reddington and 4 at Vedic; with mild to moderate levels of injuries while 2 are receiving intensive medical care.

3 patients have been discharged & we will continue to monitor and ensure all patients get the best care.