The station was invaded in the wee hours of Wednesday, October 21, and set ablaze by unknown arsonists. 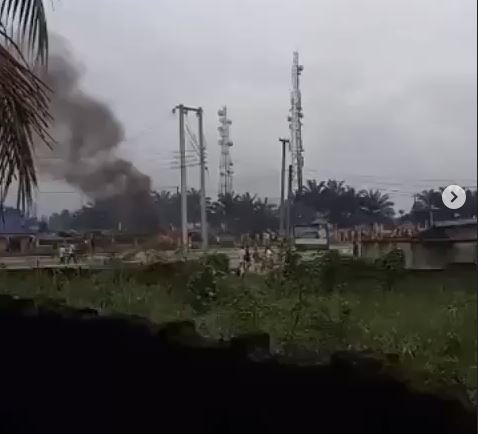 The police station in Oyigbo, Rivers state has been set ablaze amid the #EndSARS protest across the country.

Daily Trust reported that the Police Area Command at the Port Harcourt/Aba Expressway was invaded in the wee hours of Wednesday October 21, and set ablaze by unknown arsonists.

An eyewitness told the publication;

“It started in the midnight of Tuesday when we started hearing gunshots.

“Bullets were flying from all directions and we took cover because my house was very close to the police station.

“I overheard them shouting that they were on a revenge mission over the killing of innocent protesters in Lagos.

“They set the armoured police tank in front of the police station with the driver inside ablaze.

“They shut their way into the station before setting the police station ablaze.

“One other police officer was also shot dead.

“We did not sleep at night.

“All the police officers inside the station as well as those in the barracks ran away."

Rivers State Police Command Public Relation Officer, Nnamdi Omoni, confirmed the story and also disclosed that the Commissioner of Police, Joseph Mukan will visit the police station to see things for himself.

Here are videos below;

Oyigbo police station in Rivers state has been set on fire