There is tension in the air over attempts by hoodlums to raze down the Ughelli Area Command on Wednesday. 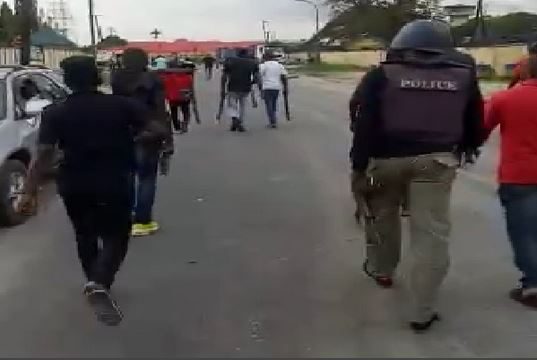 According to The Nation, tension has taken over Ughelli, the headquarters of Ughelli North council area of Delta.

There is tension in the air over attempts by hoodlums to raze down the Ughelli Area Command on Wednesday, The Nation reports.

The Delta Police Command, while confirming the attempt, noted its men were able to repel the attack which launched around 3pm.

Asked if some persons tried to burn down the Area Command, she said “yes”, adding that the people instigating the attack are not known.

A video clip seen by The Nation showed dozens of armed policemen around the Ughelli Area Command chanting war songs and warning the hoodlums to steer clear of the Command and barracks or face their wrath.

“The Police are protesting in Ughelli Area Command/ ‘A’ Division. Stop the killing of Police, enough is enough. And stop burning our Police stations. The Police are human beings. We are tired, we are ready.

“We will kill those hoodlums now that are trying burn the station today. We overpowered them and sent them back. We will kill them. Enough is enough. They say they are coming we are waiting for them,” a voice behind the camera said.