CNN has again tackled Nigeria's Minister of Information and Culture, Lai Mohammed over his statement on its Lekki toll gate shooting investigation. 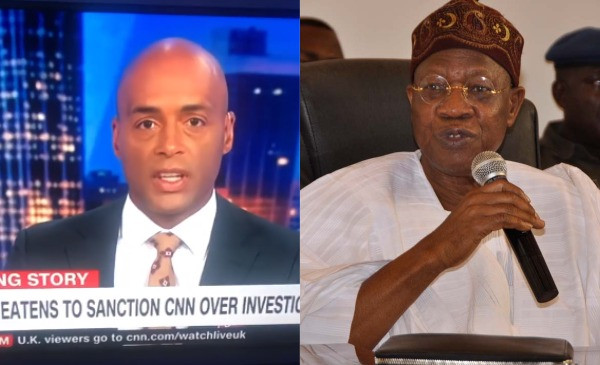 CNN host and Lai Mohammed
CNN has once again, called out the Minister of Information and Culture, Lai Mohammed for not providing any evidence to back his claim.
Recall that Mohammed had yesterday accused CNN of being irresponsible in its investigation of Lekki shooting and called for sanction against the media group.
However, this morning, CNN called out Mohammed again on their newsroom program, over threats of sanction.
The American News agency which stated that it is standing by its report on the Lekki toll gate, stressed that Lai Mohammed did not provide any evidence to back his allegation of them being "irresponsible" with their report which he claimed was "one-dimensional and lacking in balance."
Recall that Mr. Mohammed who also insisted that military only fired empty bullet on protesters at Lekki toll gate, also queried Dj Switch on who she is allegedly fronting for.
Reiterating that the Nigerian army and Lagos government refused to comment on their findings, CNN added that their report was based on testimonies from dozens of witnesses, photos geolocated by CNN which according to them painted a picture of how "members of the Nigerian army and the police shot at the crowd, killing at least one person and wounding dozens"
CNN also disclosed that they verified footage obtained from witnesses and protesters by using time stamp and data from the video files.
Watch the video below: