Following calls for the sack of Gernot Rohr as Super Eagles coach, the NFF has reacted. 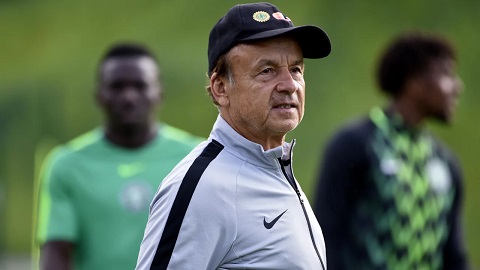 Rohr
A reason has been tendered by the Nigeria Football Federation (NFF) why Super Eagles coach, Gernot Rohr cannot be sacked.
Speaking on calls for his sack, NFF President, Amaju Pinnick, said Rohr can't be sacked as head coach of the Super Eagles, because of the cost.
Rohr has come under intense criticism, after the team failed to win any game in 2020.
The Eagles lost to Algeria and played a 1-1 draw against Tunisia in last month’s international friendly matches.
The three-time African champions ended the year with two disappointing draws against Sierra Leone in their Africa Cup of Nations qualifiers.
It led to the Minister of Sport and Youth Development, Sunday Dare, hinting that Rohr could be axed.
However, Pinnick insists Nigeria cannot afford to sack the German, especially since he just signed a new two-year deal in May.
“We cannot afford to sack Gernot Rohr. We cannot,” Pinnick said in an interview with NTA.
Rohr has been in charge of the Super Eagles since 2016 and has led Nigeria to the 2018 World Cup with a game to spare and repeated the same feat for 2019 AFCON, finishing in third place.
His new deal expires after the 2022 World Cup in Qatar.
Top Stories