It was gathered that the victims were hit by bullets after the policemen who were in a happy mood shot in the air. 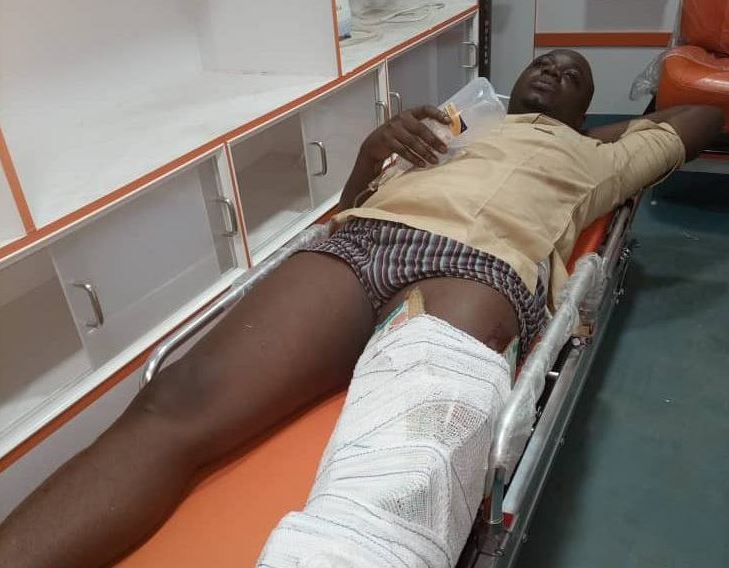 On Saturday,  November 21, two persons in a hotel at Ado Ekiti, the Ekiti State capital were reportedly shot and injured by policemen on escort assignment.

An eyewitness alleged that the incident occurred when the policemen numbering about five, attempted to pay a retired senior officer compliments. It was gathered that the victims were hit by bullets after the policemen who were in a happy mood shot in the air.

While one of the victims died after being struck in stomach, the second victim, pictured above, was admitted for treatment after suffering gunshot injuries in the leg.

The policemen who realized that one of the victims was dead upon arriving the Ekiti State University Teaching Hospital, abandoned the corpse, left the injured man and the van and reportedly fled the facility.

Confirming the incident, Ekiti police spokesperson Sunday Abutu said the killer-cop has been arrested and currently detained at the command headquarters in Ado Ekiti. He also disclosed that the policeman is not from the state police command.

“We have established that there was a shooting incident on Saturday night at one hotel in Ado Ekiti. Two persons were hit and one is died, while the second man is receiving treatment. The corpse of the deceased has been deposited in a morgue.
.
“The policeman who was responsible has been arrested and is now in our custody. We are not going to hide anything. Though those involved are not from our command, the incident is within our jurisdiction and we promise that whoever is found culpable will be prosecuted accordingly."