In the clip, taken by NOAA's Deep Discoverer, the comb jelly glides through the water, trailing its pair of tentacles in its wake. 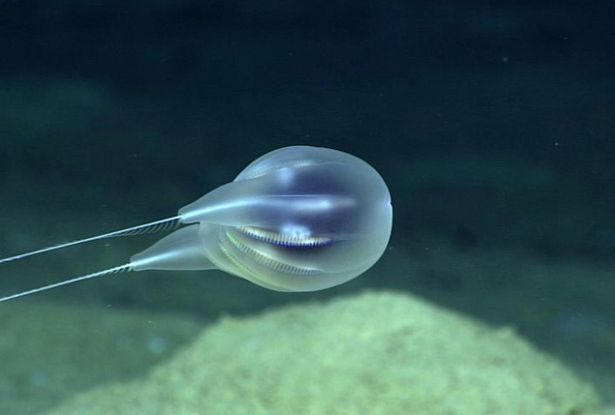 The comb jelly gliding through the water (Image: NOAA Fisheries)

In what will come across as a really startling development, an odd-looking animal has been found underwater.

The animal that researchers have described as a "party balloon with dangly bits" has turned out to be a new species of comb jelly.

The see-through critter, which is likely to be hermaphroditic – having both male and female sex organs – has been caught on video for the first time 2.5 miles underwater in Puerto Rico.

In the clip, taken by NOAA's Deep Discoverer, the comb jelly glides through the water, trailing its pair of tentacles in its wake.

Zooming in closer, the footage shows the animal is round in shape and has tiny hair-like features on its tentacles that wriggle around.

Allen Collins, an NOAA fisheries zoologist, said: "I thought: that is so weird looking.

"It's like a party balloon, only instead of sort of having one string hanging down, it's got two little dangly bits."

Another NOAA fisheries scientist, Mike Ford, reckoned the animal was like a "hot air balloon" and might somehow be attached to the seafloor.

He said: "The ctenophore has long tentacles, and we observed some interesting movement.

"It moved like a hot air balloon attached to the seafloor on two lines, maintaining a specific altitude above the seafloor.

"Whether it’s attached to the seabed, we’re not sure.

"We did not observe direct attachment during the dive, but it seems like the organism touches the seafloor."

The footage was recorded on April 10, 2015, but the comb jelly has only now in 2020 been named as the new species and genus Duobrachium sparksae.