Okorie Daniel and Fabian Ivoke got the boot after leaders of Ivo council gathered to endorse the defection of the governor from the APC to the PDP. 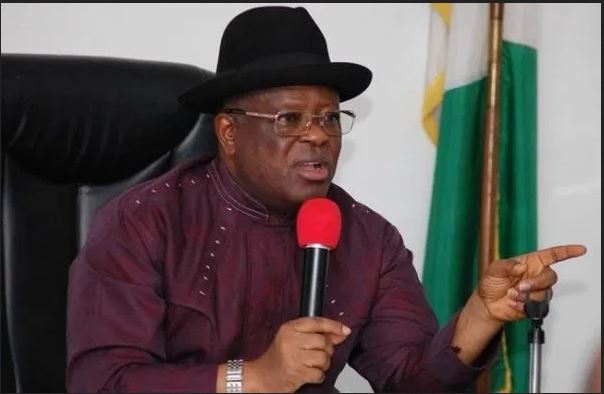 Okorie Daniel of Ivo DC and Fabian Ivoke of Echiele DC got the boot just after leaders of Ivo council gathered on Wednesday November 25 in Abakaliki, to endorse the defection of the governor from the All Progressive Congress (APC) from the Peoples Democratic Party (PDP).

The meeting was attended by present and former members of the National Assembly, State House of Assembly and the State Executive Council, members of federal and state boards and commissions and council chairpersons from the council.

The vice chairpersons, leaders of Ivo Legislative Council, coordinators of development centres, chieftains of the APC, traditional rulers and town union presidents were also present at the meeting.

The leaders expressed their total support for Mr Umahi and dissociated themselves from the activities of Mr Anyim, who is from Ivo LGA in a communique read out by the Commissioner for Information, Uchenna Orji.

“That despite having him as Senate President for about three years and Secretary to the Government of the Federation for four years, no form of infrastructure or human empowerment was attracted to any part of Ivo Local Government Area let alone South East, except crisis and killings of innocent people. Our people were impoverished.”

“The meeting was to articulate our position on the issue but at the tail end of the meeting, a communique was brought from somewhere defaming the person of Senator Anyim.

"We can have different political ideologies or support the governor or any other person we want to support, but not to come and start defaming Anyim. We can play our politics without insulting our elders."

Shortly after dissenting, the two coordinators were relieved of their duties as heads of the two development centres.

A statement by the secretary to the state government, Kenneth Ugbala read;

“Consequently, the two former officials are directed to hand over all government property in their possession to the Secretary to the State Government/Coordinating Commissioner before the close of work on Thursday, 26th November, 2020."

Since his defection on November 20, Governor Umahi has been sacking some of his officials.