The National Working Committee of the party also announced and inaugurated a nine member caretaker committee headed by Fred Ụdogụ. 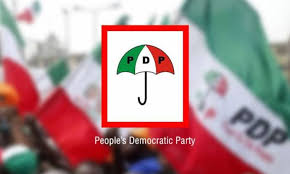 The members of the newly sworn in State Caretaker Committee of the People Democratic Party (PDP) have been restrained by an Ebonyi State High Court on Thursday from parading themselves as such.

According to The Nation, this followed an ex-party motion brought by the Onyekachi Nwebonyi led State Working Committee of the Party which was earlier dissolved by the National Executive Committee of the party.

Mr. Nwebonyi, (Chairman) and Members of the State Working Committee of the party were dissolved last week following the defection of the governor, David Umahi to the All Progressive Congress.

The National Working Committee of the party also announced and inaugurated a nine member caretaker committee headed by Fred Ụdogụ.

But Nwebonyi and other members of the SWC sued the People’s Democratic Party(1st respondent) the National Chairman, Uche Seconds (2nd respondent) challenging the dissolution.

Also joined in the suit as 3rd to 11th respondent are the nine members of the Caretaker Committee.

The plaintiffs represented by their Counsel, Roy Umahi, alleged wrongful dissolution of the SWC claiming that they were not given fair hearing before the purported dissolution.

The plaintiffs also sought an interim injunction restraining the first respondent (PDP) and second respondent (Secondus) from continuance of the purported establishment or composition or recognition of the Caretaker Committee comprising the 3rd to 11th respondents.

The plaintiffs further prayed the court to restrain the PDP and Seconds from inaugurating, transferring to, and /or vesting on the 3rd to 11th respondents the authorities, powers and/or functions of the exercised members of the State Executive of the party at state, LGA and ward levels pending the determination of the motion on notice.

They also urged the court to restrain the 3rd to 11th respondents from parading themselves as caretaker committee members in charge of Ebonyi State chapter of the party and or usurping the powers and function of the State Executive Committees at the state, LGA and ward levels pending the determination of the motion on notice.

The plaintiffs further prayed the court to grant them leave of substituted service to the respondents.

The plaintiff’s lawyer, Mr. Roy Umahi further argued that there were no facts warranting or necessitating the dissolution by the 1st and 2nd defendants of the of Ebonyi State Executive Council Committee of the PDP at the State, local government and ward levels each selected for a four year tenure.

He further noted that there was no genuine reason for the setting up of a caretaker committee.

Mr. Roy further argued that neither the National Executive Committee nor any other organ of the party has the power or authority to dissolve the local government and ward executives of the party before the expiration of their tenures.

In his ruling, the presiding Judge, Justice Elvis Ngele granted all the prayers of the plaintiffs.

He, thereafter, adjourned the matter to December 2, 2020 for hearing.

Reacting, Mr. Nwebonyi said the ruling is a landmark which will in turn end an era of impunity in the party.

He further noted that with ruling the State Working Committee led by him, will continue to carry out its activities uninterrupted.