Protests have erupted in France after a video of police brutalizing a black man surfaced online. 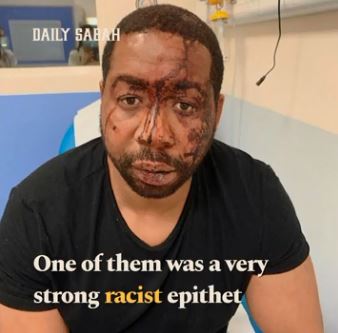 The victim battered by the police
A black man, Zecler has been brutally battered by French police officers.
The shocking footage of the incident has sparked protests in the country. French Interior Minister Gérald Darmanin has now ordered the suspension on Thursday of the four police officers involved in the brutal beating of a music producer in a Paris studio over the weekend.
Footage of the incident showing police officers repeatedly punching the Black man and using truncheons was posted by a news site, sparking widespread condemnation.
The video clip, published by French website Loopsider, shows the violent arrest of music producer Michel Zecler in the 17th arrondissement (district) of the French capital on Saturday.
According to the police officers' written declarations, Zecler drew their attention because he was not wearing a mask on the street, French media reported. Face masks are mandatory in Paris outdoors amid the Covid-19 pandemic.
The four officers are due to be questioned by authorities on Friday. Darmanin said Thursday evening that he would ask for their "dismissal", if justified, once the facts are established.
Gruesome beating, tear gas, racial slur allegations
Footage from a security camera inside the music studio as well as video filmed by neighbours outside show three officers following Zecler from the street into his studio, where they can be seen punching him and beating him with a truncheon.
The police officers repeatedly used racial slurs during the beating, Zecler told the press shortly after he filed a complaint with the Parisian headquarters of the General Inspectorate of the National Police (IGPN).
"People who must protect me are attacking me ... I did nothing to deserve this," he said in the presence of his lawyer. "I just want these three people to be punished by the law."
In their report, the police officers wrote that the man had hit them. But footage of the incident showed no sign of the victim resisting arrest.
In the second part of one video, people who were in the basement of the studio manage to reach the entrance, causing the police to withdraw outside and the studio door to close.
The policemen then try to force the door open and throw a tear gas canister inside the studio, causing the room to smoke.
Following the incident Zecler was initially placed in police custody as part of an investigation by the Paris public prosecutor's office for "violence against a person holding public authority" and "rebellion".
But the prosecutor's office closed this investigation and opened a new procedure on Tuesday for "violence by persons holding public authority" and "forgery in public writing", which was entrusted to the IGPN.
‘I believe in the justice of my country’
The latest police brutality video sparked condemnation on social media sites, with top footballers such as Kylian Mbappé joining his French national teammates and other athletes in calling for an end to racism.
"Unbearable video, unacceptable violence," Mbappé wrote on Twitter next to a picture of the injured producer. "Say no to racism."
In an interview with The Associated Press, Zecler said he felt assured “now that the truth is out”, adding: “I want to understand why I have been assaulted by people who were wearing a police uniform. I want justice actually, because I believe in the justice of my country," he said.

His lawyer, Hafida El Ali, said: “He asked them what they wanted, if they wanted to check his identity. (...) They didn't stop beating him, the video of the violence (inside the studio) lasts for 12 minutes.”
El Ali said that nine others who were recording music in the studio basement were also beaten.
“Outside they are still beaten up and thrown to the ground and that's the moment when a police officer sees they are being filmed," she said.
“These videos are essential because initially my client was being detained ... for violence against people with public authority," El Ali said.
"This is very serious. The reality is that if we didn't have these videos maybe my client would be in prison.”
Watch video below:
Top Stories