Following the slaughter of rice farmers in Borno state, Pope Francis has broken his silence. 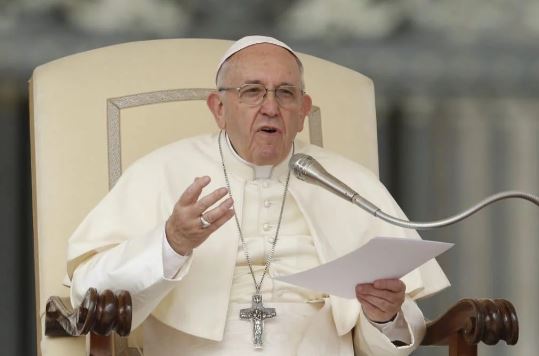 Pope Francis
Boko Haram terrorists have been condemned for slaughtering innocent farmers in Borno state.
Pope Francis on Wednesday condemned the massacre.
The farm workers were slaughtered by the terrorists in Borno State on Saturday.
The Abubakar Shekau’s faction of Boko Haram has since claimed responsibility for the killings which left at least 43 people dead.
“I want to assure my prayers for Nigeria, where blood has unfortunately been spilled once more in a terrorist attack,” he said in his weekly general audience.
Remembering those who he said were “brutally killed”, he said: “May God welcome them in his peace and comfort their families, and convert the hearts of those who commit similar atrocities, which gravely offend his name.”
Recall that we had earlier reported that Boko Haram fighters killed at least 43 farm workers and injured six in rice fields near Maiduguri, the Borno State capital on Saturday.
The assailants had reportedly tied up the agricultural workers and slit their throats.
“We have recovered 43 dead bodies, all of them slaughtered, along with six others with serious injuries,” militia leader, Babakura Kolo, told AFP.
“It is no doubt the handiwork of Boko Haram who operate in the area and frequently attack farmers,” Kolo added.
The victims were laborers from Sokoto State in northwest Nigeria, roughly 1,000 kilometers (600 miles) away, who had traveled to the northeast to find work, said another militiaman Ibrahim Liman who gave the same toll.
The pope also used his address Wednesday to mark the 40th anniversary of the death of four missionaries who were kidnapped, raped, and killed by a paramilitary group in El Salvador during the civil war.
“With evangelical dedication, and running great risks, they were bringing food and medication to the displaced and were helping poorer families. These women lived their faith with great generosity. They are an example for everyone to become faithful missionary disciples,” he said.
Top Stories